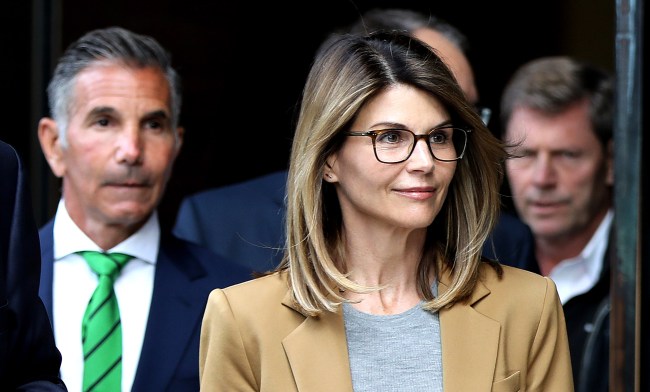 Fresh on the heels of news that Hot Pockets heiress Michelle Janavs was sentenced to five months in prison comes news out of the Lori Loughlin camp as her and her husband Mossimo Giannulli desperately try to avoid jail time for their part in the “Varsity Blues” college admissions bribery scandal.

As Loughlin and Giannulli’s court date grows closer, the couple and their attorneys have been pulling out all the stops from trying to convince a judge that the $500,000 they gave to USC was a “legitimate donation” to claing that the government has withheld evidence in their case.

Both of Loughlin and Giannulli daughters, Olivia Jade and Isabella, were also presented as USC crew recruits, complete with fake resumes, even though neither had actually participated in the sport as a part of the scam.

Now, Loughlin’s legal team is claiming that there is new evidence that exonerates the couple.

The new evidence, court documents obtained by People, reveals that Rick Singer, the mastermind of the entire college admissions bribery scandal, had written notes which claimed that the FBI “recorded phone calls that they directed him to make to his clients in order to induce inculpatory statements to be used against those clients.”

“Singer’s notes indicate that FBI agents yelled at him and instructed him to lie by saying that he told his clients who participated in the in the alleged ‘side door’ scheme that their payments were bribes, rather than legitimate donations that went to the schools,” attorney Sean M. Berkowitz states in a new court filing on behalf of Loughlin and Giannulli. “They further note the Government’s desire to ‘nail’ one of the defendants ‘at all costs.’”

The notes also reveal that Singer told his attorney, “Essentially they are asking me to bend the truth which is what they asked me not to do when working with the agents and Eric Rosen (Asst. U.S. Attorney).”

Singer also reportedly told his attorney, “Loud and abrasive call with agents. They continue to ask me to tell a fib and not restate what I told my clients as to where there (sic) money was going — to the program not the coach and that it was a donation and they want it to be a payment.”

Berkowitz has asked the Boston federal court to postpone the setting of a trial date, which was scheduled to happen Thursday, until all evidence disputes have been decided.

“This afternoon, less than 24 hours before the status conference at which the Court intended to set trial dates in this mater, the Government for the very first time produced in discovery Brady information that is not only exculpatory, but exonerating for the Defendants the Government has charged with bribery,” Berkowitz states in the documents. “That discovery consists of Rick Singer’s written notes contemporaneously memorializing his discussions with FBI investigators about recorded phone calls that they directed him to make to his clients in order to induce inculpatory statements to be used against those clients in subsequent criminal prosecutions.”

Prosecutors reportedly don’t believe this new information will make any difference, calling the notes from Singer”a con man’s interpretation” of his interaction with the FBI, reports ABC News.

Hard to believe, but Loughlin’s “we didn’t know it was wrong” defense appears to actually be gaining some traction.