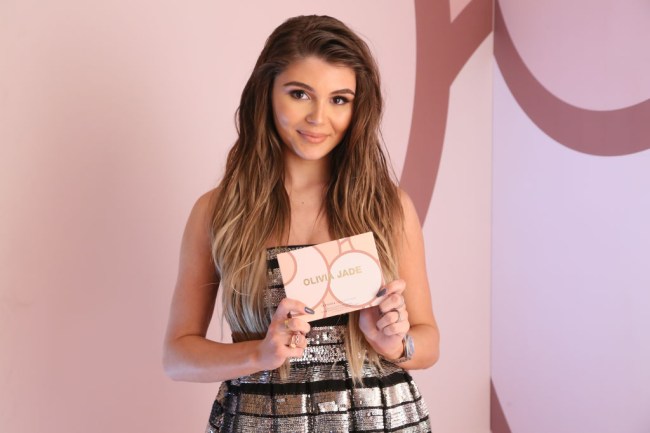 Lori Loughlin and her husband Mossimo Giannulli are facing up to 40 years in federal prison. The couple’s daughter Olivia Jade Giannulli is spending as much quality time as possible with them and helping them prepare for their upcoming court date. Just kidding, she’s out partying into the wee hours of the morning with friends.

Full House star Loughlin (54) and Giannulli (55) have been hit with money laundering conspiracy charges and conspiracy to commit fraud for their involvement in the nationwide college cheating scandal that erupted in March. The duo allegedly committed crimes in an effort to get their daughters Olivia Jade and Isabella Giannulli into the University of Southern California under the ruse that they were rowing athletes. They reportedly paid $500,000 to get their daughters into USC. Olivia Jade’s parents have pleaded not guilty to the charges.

Despite the looming and seemingly definite prison sentence for her parents, Olivia Jade was caught out partying hard on early Wednesday morning. The 19-year-old YouTube influencer hit a club with her friends in Los Angeles. At around 2 AM, Olivia Jade was spotted leaving the popular club Bootsy Bellows in West Hollywood according to Page Six.

How does the saying go, “We all deal with grief differently.” Olivia Jade deals with her parents potentially getting a life sentence in federal prison for trying to get her into USC by partying in West Hollywood. Who are we to judge?

That being said, that’s gotta hurt Aunty Becky as she’s crapping her pants at even the thought of going to prison for decades and the possibility of getting shanked for using the wrong urinal in jail. The same time that Olivia Jade is partying, Lori is watching YouTube tutorial videos on how to make prison wine out of rotting oranges and ketchup. All because she tried to get her influencer daughter into a decent college. Talk about an all-time backfire.

Olivia’s Friend: “Hey Olivia, are your parents letting you go out tonight?”

Olivia: “Parents? What are those? Hahahahahahaaa!”

To make the family dynamic even worse, there are reports that Lori Loughlin is estranged from her daughter Olivia Jade, according to a source close to the family who told Fox News. The popular social media influencer is reportedly furious with her celebrity mother because she thinks her life and business were “ruined” because she allegedly tried to get her into a good college.

“[Olivia] feels this could have all been avoided had her mother listened to her when she expressed she wasn’t interested in going to college,” the source stated. “The fact she has lost her business deals and can’t go out in public without being photographed and scrutinized is a constant reminder of what her mother has done.” Loughlin and Olivia attempted therapy to repair the broken relationship, but that failed.

“Lori’s situation has gone from bad to worse. Jail time has always been a possibility, but since more charges were filed her reality [of not serving time] seems grim,” a source close to Loughlin said. “While the fact she could serve time never leaves her mind, she strongly believes she doesn’t deserve to. She truly feels it was all a misunderstanding.”

Olivia Jade has been silent on social media since her parents were arrested and has not posted on her popular YouTube or Instagram pages.

Operation Varsity Blues not only nabbed Aunt Becky, but also snagged fellow actress Felicity Huffman. On Monday, Huffman did the opposite of Loughlin when she pleaded guilty to her involvement in the college bribery scam. During her hearing, prosecutors recommended a sentence of four months in prison and a $20,000 fine. Huffman will be sentenced at a later date for her alleged crimes of paying $15,000 to fraudulently boost her daughter’s SAT score.

Loughlin has taken notice of Huffman’s legal proceedings to give her an idea of what she can expect. “Lori is watching Felicity’s case very closely,” a source close to the family told People magazine. “She’s relieved that it doesn’t look like the prosecution is making an example of Felicity, and is adhering to the law.”

“Her big worry was that she would be treated unfairly as one of the more famous people involved in the case,” the source revealed. “She’s afraid of being penalized for her fame, but it looks like prosecutors may be making a good faith effort to treat each defendant fairly. “

Last month, Loughlin and Mossimo pleaded not guilty and before that, they turned down a plea deal because it included jail time. There is no set date for the couple’s next court date. It definitely sounds as if Olivia Jade will have plenty of time to party when her parents go to jail and she’ll have nobody to tell her otherwise. Pretty soon Olivia Jade will be in bars and her mom behind bars.