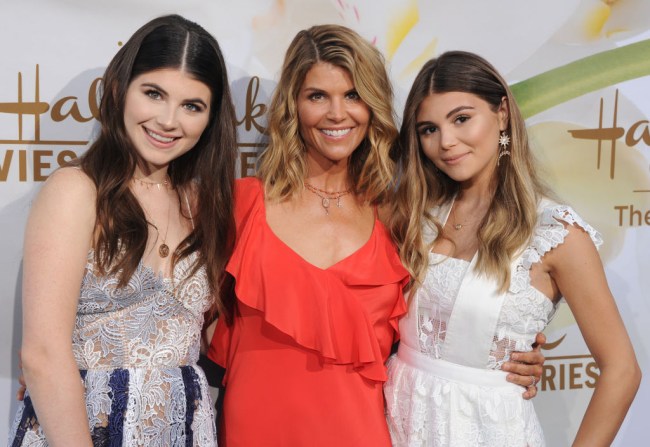 Lori Loughlin’s charmed life is about to sour. Justice is coming for those involved in the college cheating scandal and it certainly appears that the Full House actress will serve time in prison. When she was first confronted by prosecutors about the prospects of her going to jail for paying college bribes, Loughlin allegedly thought they were bluffing. Narrator: They were not. Loughlin is reportedly in panic mode now that she is potentially looking at a maximum prison sentence of 40 years.

On Monday, Felicity Huffman and 13 other parents wisely pleaded guilty for their actions in the college cheating scandal. The actress then issued an apology for her actions in the college cheating scandal where she attempted to help get her child into college. Huffman paid $15,000 to William “Rick” Singer’s fake nonprofit Key Worldwide Foundation so that a proctor would correct her daughter’s SAT exam after she took the test.

“I am pleading guilty to the charge brought against me by the United States Attorney’s Office,” she said in her apology. “I am in full acceptance of my guilt, and with deep regret and shame over what I have done, I accept full responsibility for my actions and will accept the consequences that stem from those actions.”

“I am ashamed of the pain I have caused my daughter, my family, my friends, my colleagues and the educational community,” she continued. “I want to apologize to them and, especially, I want to apologize to the students who work hard every day to get into college, and to their parents who make tremendous sacrifices to support their children and do so honestly.”

However, Lori Loughlin was not one of the 13 parents who pleaded guilty and apparently it is because she thought prosecutors were bluffing about sending her to jail. Loughlin turned down a potential plea deal that would have had a minimum prison sentence of two years.

According to a source with E! News, Loughlin “has been in complete denial and thought maybe she could skate by.” That could explain why Loughlin was seen smiling and signing autographs for fans outside of the Boston federal courthouse last week.

Loughlin “refused to accept any jail time and thought the DA was bluffing. She was adamant she wouldn’t do any jail time.” Maybe Lori Loughlin should keep to being Aunt Becky and not pretending that she is a criminal lawyer.

However, Loughlin is quickly understanding that she made a grave mistake and is now realizing that she is definitely going to jail. “Lori is finally realizing just how serious this is,” the source says. “She is seeing the light that she will do jail time and is freaking out.”

The 54-year-old Loughlin and her fashion designer husband Mossimo Giannulli are facing charges of conspiracy to commit fraud and the feds tacked on an additional charge of money laundering conspiracy on Tuesday. They were arrested last month during the Operation Varsity Blues bust for allegedly bribing the USC crew coach so that her two daughters could get admitted into the university. Loughlin and Giannulli paid $500,000 each to get Olivia Jade and Isabella into the University of Southern California. If convicted, the couple faces up to 40 years in prison.

“Their lives will never be the same,” an insider said of Loughlin’s family. “They are scared and they don’t know what’s coming next. It all feels like a terrible nightmare.”

The source said Lori’s YouTube influencer daughter Olivia Jade is “very distraught and is in crisis mode.” They added, “Olivia is more embarrassed than anything and doesn’t know how to handle all of the stress and scrutiny that has been surrounding her and her family. She feels completely lost. Her and Lori are leaning on each other a lot for full support right now.”

Then there is at least one parent involved in the college bribery scam who is preparing for their future behind bars by hiring a “prison coach.” Justin Paperny is a former stockbroker turned felon who now heads White Collar Advice. He claims that he has been hired by one parent and is in talks with several other parents from the college admissions scandal to guide them on how to survive prison.

“They’re scared and it’s ‘Can I survive in prison? Am I cut out for prison?'” Paperny said. “What’s most surprising to me about the first conversation is how many of them didn’t view their actions as criminal.”

“You are certainly separated and confined, and if you’re living in the worst apartment in the worst city in America, I’d rather be there than the inside of a federal prison, especially in these open environments,” Paperny said. “Imagine walking into a gym. You see 150 bunks with no privacy or separation. That’s where you’re going to be living for several years, so I want to make that very clear. There’s very little about it that is a country club other than perhaps a tennis court or two.”

“If we can prepare them for everything that’s about to happen — if we can get them designated to a great facility where they won’t have any problems … get them into one, maybe two prison reduction programs so they’re only spending maybe six to eight months instead of 12 in prison — then they’re happy,” said Michael Frantz, director of Jail Time Consulting.

Costs for prison consulting can range from the thousands to tens of thousands of dollars. Which shouldn’t be a problem for these wealthy parents since they’re spending way more than that to get their kids into college.