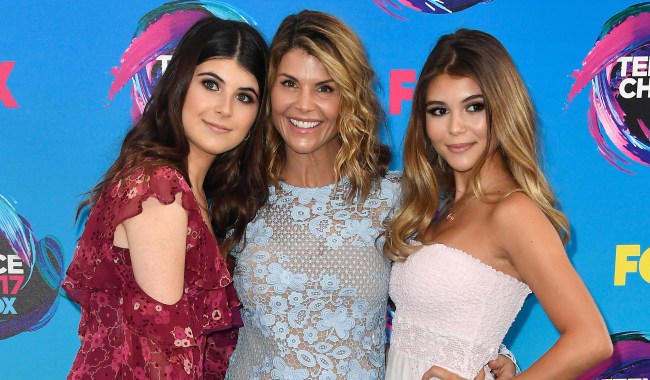 Lori Loughlin and her husband Mossimo Giannulli have both already been charged with money laundering conspiracy, conspiracy to commit mail and wire fraud and honest services mail and wire fraud in the infamous college admissions bribery scandal involving their daughters Isabella Rose and Olivia Jade Giannulli being admitted to USC under allegedly false pretenses.

After the couple turned down an initial plea deal, Federal prosecutors added an new charge of money laundering which includes the potential for an extra 20 years behind bars, three years of supervised release, and a fine of $500,000 or twice the value of the property involved in the money laundering.

This week, she probably regrets it even more.

That’s because the U.S. Attorney for the District of Massachusetts issued a press release on Tuesday in which the addition of conspiracy to commit federal programs bribery charges against Loughlin and Giannulli was announced.

The new charges in the third superseding indictment allege that 11 defendants – Gamal Abdelaziz, Diane Blake, Todd Blake, Mossimo Giannulli, Elisabeth Kimmell, Lori Loughlin, William McGlashan, Jr., Marci Palatella, John Wilson, Homayoun Zadeh, and Robert Zangrillo – conspired to commit federal program bribery by bribing employees of the University of Southern California (USC) to facilitate their children’s admission. In exchange for the bribes, employees of the university allegedly designated the defendants’ children as athletic recruits – with little or no regard for their athletic abilities – or as members of other favored admissions categories.

Both of Loughlin’s daughters were allegedly given preferential treatment in the admissions process for posing as USC crew recruits – a sport in which she did not compete.

Now, with this additional charge, Loughlin and Giannulli face up to 50 years in prison each and it’s finally got the family a little concerned.

According to a source who spoke to People, Loughlin “is terrified.”

“It just gets worse and worse for her. And you have to remember: nothing new has happened. They could have charged her with all of this last spring. But they waited. She feels like she is a scapegoat,” said the source.

Amid the ongoing scandal, the couple has put on a united front and remained focused on their marriage and daughters.

But now, the new charges — and likelihood of increased prison time — have escalated tensions within the home.

“The entire family is in chaos right now. They knew this was a possibility, but they all thought that perhaps it was just a bargaining tool from the prosecution,” shares the source.

Says the source, “Now that the charges are official, they are realizing that there is no way to avoid a moderately long prison sentence, unless they are found not guilty in a trial.”

Here comes the best part of the story…

“Lori is ready for this to be over. They all are. At this point it would be better to spend a few months in jail — because she’s been spending the last several months in her own prison,” the source told People.