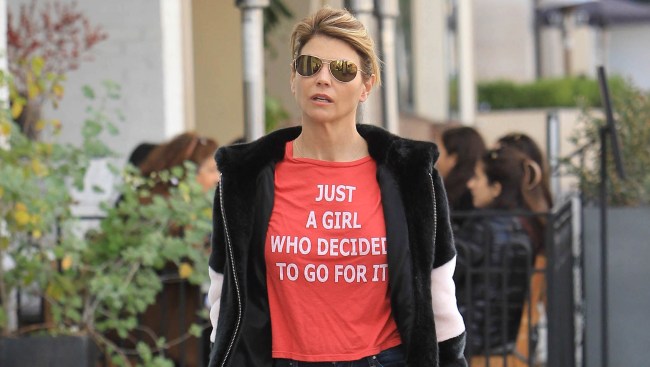 Another day, another tale of Lori Loughlin and fam being completely oblivious to the fact that they not only broke the law in the college admissions bribery scandal, but that there is a very real chance that both she and her husband will be doing some time in prison before all is said and done.

Since rejecting the prosecution’s plea deals, because she thought they were bluffing (LOL), Loughlin has entered a plea of not guilty and has been trying to spin the story as only someone with gobs of wealth and white privilege can.

Loughlin and her husband, fashion designer Mossimo Giannulli, have actually claimed that they thought they might have been breaking some rules, but didn’t realize they were breaking the law when they got their two daughters, Olivia Jade and Isabella, admission to USC by paying $500,000 and having them pose as recruits of the crew team (which they were not).

Another recent report by People, showing the level of delusion happening in this case, tried to portray Loughlin as very “faith-based” and that she “knows her faith will get her through this.”

Then, just to put the delusional cherry on top, two more reports by People magazine on Tuesday, explained how Loughlin is reportedly agnry that people are calling her a cheater and how she basically hopes that prosecutors will just somehow magically see the light.

Lori Loughlin and husband Mossimo Giannulli don’t appreciate the backlash over their alleged involvement in the college admissions cheating scam. After pleading not guilty earlier this week, a source tells People that the couple resents how the case is playing out in the public eye.

“This is putting unspeakable stress on her and her family,” a source close to Loughlin tells People. “They’re having to play this all out publicly, and they’re fair game for jokes and memes, but also outraged [by] people who are saying that they are cheaters.”

“They’re being destroyed,” the source adds.

Loughlin is also very worried about the case going to trail now that she’s rejected the plea deal, with a source close to the situation saying, “Everything comes out in trial, whether or not it’s relevant to the case. She will be under a microscope, and you only have to look at the paparazzi outside the court to know that there is widespread interest in this case. She will lose every bit of her privacy, and that’s a shame. This really is a family matter.”

Another article published on Wednesday by People expresses even further how much Loughlin is worried about going to trial.

“It’s not in their best interest for this to go to trial, and Lori knows it. Because if it goes to trial, the girls will have to take the stand, and be cross examined by a prosecution that wants nothing more than to put a notch on their belt,” says the legal source.

The source adds, “Lori is very afraid that her daughters will have to testify. That will traumatize them even more.”

Apparently she is worried that if that happens it “will undermine every accomplishment they have in the future and it will be part of their story forever.”