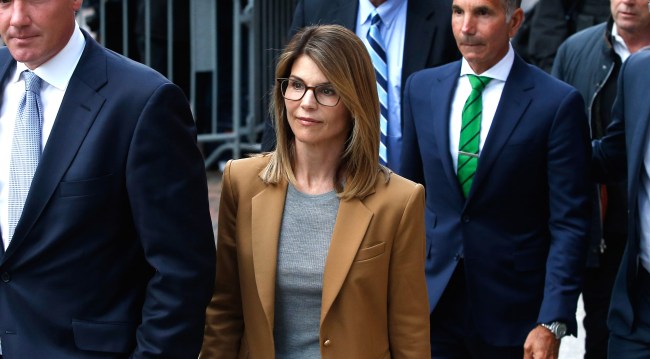 Lori Loughlin must have way better lawyers than Felicity Huffman and Hot Pockets heiress Michelle Janavs because, somehow, the former Full House star’s “we didn’t know it was wrong” defense in the “Varsity Blues” college admissions bribery scandal seems to be working.

Just last week, Loughlin’s lawyer claimed some potentially damning new evidence against the FBI stating that the mastermind of the bribery plan, Rick Singer, was coerced by the Feds into lying in order to nail the parents. Singer’s notes, claims Loughlin’s lawyer, proves her and her husband Mossimo Giannulli’s innocence in the scandal.

On Tuesday, prosecutors got more bad news when a federal judge ordered the University of Southern California to provide more information, alluding that USC has been covering up the fact it gives preferential treatment to potential students tied to influential people, according to TMZ.

The judge is ordering USC to turn over unredacted documents in the college admissions scandal. According to the judge, the University has been misleading the court by blacking out certain information in documents it’s produced.

The judge says prosecutors have argued students trying to get into USC do NOT get preferential treatment if influential people advocate for them. However, the judge says she’s now seen unredacted USC emails which “directly contradict” that claim from prosecutors.

While the court had previously allowed USC to redact names of applicants and school officials — it’s now changing that because it sees the information is critical to defense attorneys in the case.

This means that Loughlin and Giannulli’s seemingly ridiculous claim that the $500,000 they gave to USC was a “legitimate donation” and not a bribe to gain admission for their daughters Isabella and Olivia Jade Giannulli could actually… work?

Last week, Loughlin’s attorney asked the Boston federal court to postpone the setting of a trial date, which was denied and instead the judge went ahead and scheduled it for October 5th.

A source close to Loughlin told Yahoo! Entertainment, “They are not upset that the date didn’t get moved. Any new development that might challenge the prosecution’s allegations is good for them.”