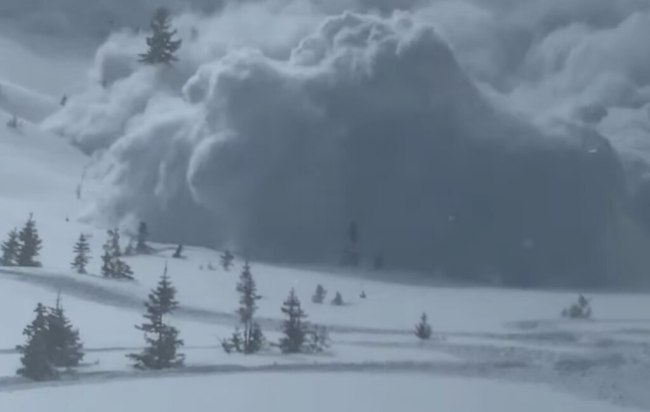 Five snowmobilers miraculously survived a massive avalanche in Utah on Saturday, and the entire unbelievable situation was all caught on video.

Snowmobiler Miles Penrose captured footage of the horrifying tragedy that happened at the Uinta Mountains and posted the videos to Facebook.

“Today we were riding in the uintahs, the snow was great up high and it was finally feeling like we had some base,” Penrose wrote on a Facebook post. “We had 3 other friends and one younger below in the flats.”

Penrose said the “mountain shook,” and his original thought was that an earthquake had just happened.

“Than it it me, avalanche,” Penrose said. “As I turned and looked up I could see the snow wave coming.”

“A second later the snow hit and the swimming started,” he said. “Somehow I only moved about 20 yards and stayed on top of the snow (MIRACLE).”

“We didn’t realize it but the avalanche had also triggered even bigger on the other side of trees where we were,” Penrose claimed. “Our 2 other friends both got hit with the wave on the FLATS.”

Penrose added that the cameraperson was “buried to about his face and somehow was able to hold on to his phone.”

In nearby Mill Creek, which is approximately 35 miles away from the Uinta Mountains, there was a report by the Salt Lake Tribune that four young adults died during an avalanche in Utah on Saturday.

“The eight skiers were part of two parties — one of five members at the top of the slope and the other with three members climbing up,” the Park Record reported. “The avalanche was triggered when the group of five started skiing down the mountain. Cutler said the skiers were carrying proper avalanche equipment.”