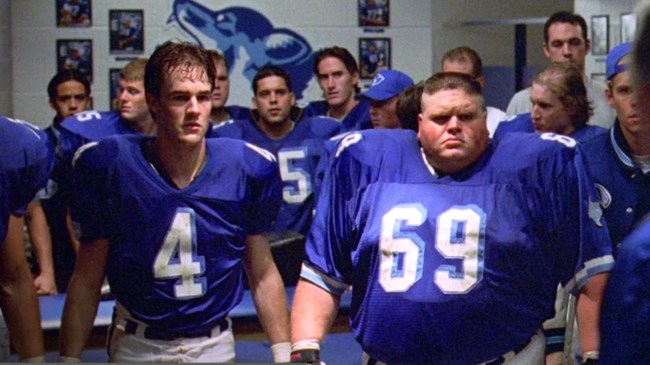 I’m not exactly sure what happened around the turn of the millennium to make Hollywood decide the world needed to be hit with a tidal wave of football movies, but over the course of a few short years, we were treated to a number of classic (and not so classic) films inspired by the sport.

Keanu Reeves channeled Johnny Utah to play a quarterback yet again in The Replacements, Denzel Washington made sure we’d never forget the Titans, Adam Sandler taught us what a medulla oblongata is, and Al Pacino gave President Whitmore’s speech a run for its money in Any Given Sunday.

Of course, I’d be remiss if I didn’t also mention Varsity Blues, which featured James Van Der Beek stepping into the pocket (and the spotlight) to help the West Canaan Coyotes salvage their season after the school’s starting quarterback was injured.

While I’m personally partial to Friday Night Lights when it comes to entertainment vehicles inspired by the truly absurd world of high school football in Texas, Varsity Blues beat that movie (and the eventual show) to the punch by a few years so credit where credit is due.

If you read the beginning of that last sentence and thought to yourself, “This guy is a fucking idiot” because I have the nerve to have a differing opinion than you do, I have some great news for you, because according to The Hollywood Reporter, you’re getting a Varsity Blues remake in the near future.

The outlet didn’t provide any real details about what we can expect as far as the plot or cast is concerned nor do we have a release date but the new take on the 20-year-old movie is being produced for Quibi, a new streaming service that’s set to launch next spring.

Here’s to hoping they can do it justice.