This Guy’s Logic For Putting A Giant, Illuminated $4,000 Middle Finger On His Front Lawn Is Rock Solid 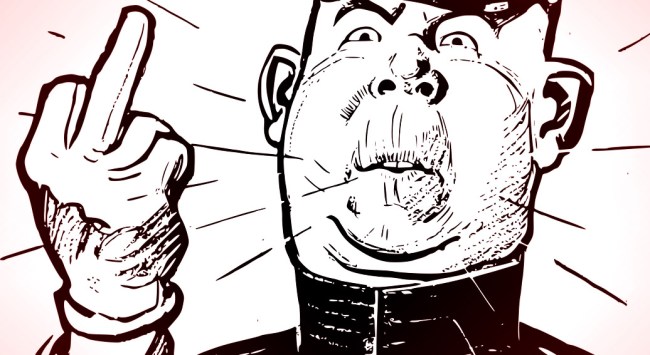 An angry Westford, Vermont man named Ted Pelkey spent $4,000 to put a giant, illuminated, 700-pound wooden middle finger sculpture, which sits on top of a 16-foot pole, on his front lawn directed at town officials. As one does.

This is his story.

Reporter Cat Viglienzoni: So who is the statue intended for?

Ted Pelkey/Sculpture Owner: It’s intended for the people who run the town of Westford.

Pelkey says it stems from a long-running dispute with the town over whether he can develop his property. He’d like to move his truck repair and monofilament recycling business there so he can take on more business and not pay rent in Swanton. But he says the town keeps putting up barriers and he believes members of the town development review board have a personal grudge against him.

Cat Viglienzoni: What do you hope happens after this?

Ted Pelkey: I’m hoping we can get it through to the people in the town of Westford to have a really long look at the people who are running their town.

According to town officials, there’s nothing they can do about the middle finger either because because it is considered public art.

“I was sitting at a bar and said to my wife, ‘Hey, I want to get a statue made of a middle finger, and I’m going to put it up on the lawn,’” he told Boston.com in an interview.

All in all, Pelkey says commissioning the massive sculpture and mounting it on the platform in his yard, which was done on Nov. 30, cost around $4,000. The display even includes two floodlights, so that it can be viewed at all hours.

As for why he decided that just erecting the sculpture wasn’t enough, he also had to light it up with floodlights, he said, “I want it lit up, so you can see it day and night. It’s getting dark early nowadays, right? Four o’clock, it’s dark. People want to see it.”

Pelkey also told Boston.com that finding out that the sculpture was considered “public art” was the “most wonderful thing I’ve ever been told in my life.”

I hate to admit it, but I kind of like his style.