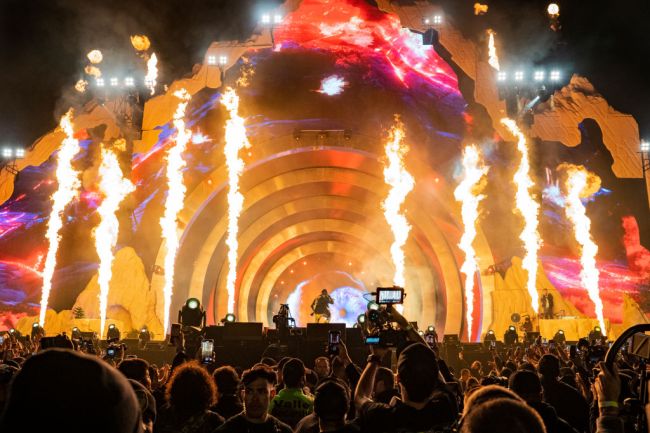 There are some disturbing images coming out of Travis Scott’s Astroworld festival where at least eight people died and hundreds were injured on Friday night.

According to Houston Fire Chief Samuel Pena, fans attending the festival surged toward the front of the stage during Scott’s performance and triggered panic in the crowd of 50,000 people. Medical personnel at the event were reportedly overwhelmed and had trouble attending to the large amount of trampled fans in the crowd.

At about 9:15 p.m. Houston Fire Chief Samuel Pena said the crowd, which numbered an estimated 50,000, compressed toward the front of the stage and people began to panic and people began to “fall out” and become unconscious. Authorities, seeing the triggered event, began transporting people to hospitals at around 9:38 p.m.

An officer who witnessed the incident said it seemed to happen “all at once.”

“It seemed like it happened over the course of just a few minutes,” he said. “Suddenly we had several people down on the ground experiencing some type of cardiac arrest or medical episode and so we immediately started doing CPR and moving people.”

Videos shared on social media show attendees dancing on top of police carts and ambulances attempting to get to trampled fans while Travis Scott continued singing in the background.

Another video- #Disturbing video shows people #jumping on top of the police personal cars while they were trying to get #unconscious people out of the #crowd.#Houston #ASTROWORLDFest #TravisScott #AstroWorld #music #festival #Houston#KHOU11 pic.twitter.com/tubnfQIVPS

Footage captured at Astroworld during Travis Scott's performance shows fan jumping onto ambulance that was inside the crowd attending trampled victims & dancing on top of it. #ASTROWORLDFest #AstroWorld #astroworldfestival #ASTROFEST #TravisScott pic.twitter.com/4umI9AjwDJ