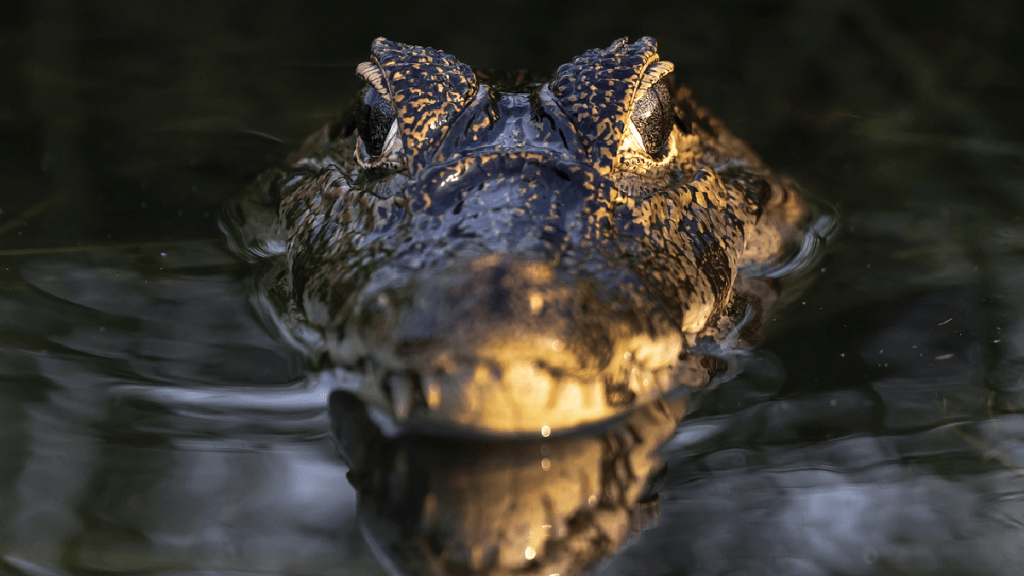 A viral video has been making the rounds that claims an ‘invasion of crocodiles’ in Brazil has locals ‘panicked’ after thousands of crocs swarmed a beach. Don’t believe these claims, should you see them.

First things first, this isn’t some random touristy beach in Brazil. The crocodilians seen in the viral video are in the Pantanal Wetlands of Brazil which is around ten times the size of the Florida Everglades.

Also, these aren’t the massive saltwater crocodiles people worry about. The reptiles seen in this video are caimans which are smaller and they’re all huddled around a watering hole to fish and stay cool during Brazil’s dry season which runs from March through November, opposite to the Northern Hemisphere.

The viral video showing a ‘Crocodile Invasion’ in Brazil that has the locals ‘panicking’ is just a cool nature video that’s being mischaracterized.

In Brazil, an invasion of crocodiles that have flooded one of the beaches with several hundred, even thousands, and the local population is panicking pic.twitter.com/3xnkqHdoyl

Let’s take a stroll on the beach, it’ll be fun they said! Where in the world is this? Caiman Beach, Brazil? 🐊🐊🐊

Those Caimans are exactly where they’re supposed to be.

The video appears to have been credited to this Instagram account where the bio is written in the Indonesian language. They posted footage of the caimans on September 1st and from there it made its way to Twitter and Reddit, each time being framed as ‘locals are FREAKING OUT’ when in reality, the Pantanal is the largest wetland on planet earth.

We’re talking about 42 MILLION acres here, with an estimated 10,000,000 caimans swimming around. There is approximately ZERO local population that is worried about an ‘invasion’ of caimans because they’re already there. It’s not as if you hear people from Florida and Louisiana crying about an invasion of alligators. And that’s because the gators are exactly where they’re expected to be, just as these caimans are where they’re supposed to be.

However, we have no proof that this isn’t the end game down there. A return to classical ways of life:

What a way to live that would be!

One Zoologist with a large social media following chimed in to shed light on the matter:

This is not an invasion, locals are not panicking 🤦

This "beach" is part of the Pantanal aka the largest tropical wetland, as well as perhaps the most pristine, in the world.

Oh, and, these are not crocodiles – they are Yacare caiman. https://t.co/xmteekMoaF

Others pointed out that all the caimans / crocodiles are doing is warming up. As soon as their bodies have sufficiently warmed up they’ll slither back into the water in the Pantanal and move about their business.

Locals are not panicking and these so-called crocs are just trying to catch a little sun.

If you want to see some truly baffling alligator-related footage…

This story has been going viral for over a week. It’s about an alligator, not a crocodile invasion. However, it’s one of the most outrageous stories we’ve ever seen.

A Sarasota, Florida man lost his arm after being attacked by an alligator then survived in the swamp for 3 days wiggling parts of his missing arm. He eventually found help, went to the hospital, and is now sharing his story:

Here are two versions of the interview from local Sarasota and Tampa Bay-based news outlets:

Absolutely bonkers. He said he was trying to wiggle his missing fingers and could see the hanging tendons twitching inside his arm. His exact words were “bones poking out, muscles, if I try to move my fingers, you could see it twitching.”

How this man survived for three days without loss of blood or simply dying from shock and pain defies the limits of human capabilities. Eventually he started tracking the power lines after thinking he was walking in circles and followed those until he found a fence with a man on the other side who called paramedics and hot him to Sarasota Memorial Hospital.

I don’t suspect there are many people out there who take swimming with alligators lightly, but this should serve as a reminder that if there are alligators in the water it’s time to get out. Give them their space and tragic things won’t happen.