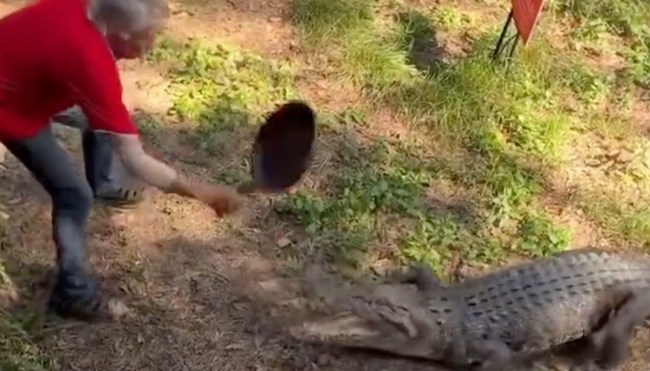 Australia has served as an almost disturbingly consistent source of videos highlighting the deadly, venomous, and otherwise terrifying forms of wildlife you apparently never know when you’re going to run into when you’re on the continent.

If you need examples, I’ve got plenty, like the man who discovered a python in his fridge when he went to snag a beer, a golfer who had a good walk spoiled when a massive robber crab climbed onto his bag and snapped the shaft of his club, and, most recently, a guy who spent more than six minutes fighting a kangaroo after it went after his dogs.

However, I’m not sure if any of those clips come close to the level of insanity packed into one that recently surfaced after the owner of a pub located on a tiny island situated in the middle of the Adelaide River came face-to-face with a crocodile.

According to 9News, Kai Hansen, who’s earned the nickname “King Kai” since opening up the Goat Island Lodge in a remote isle in Australia’s Northern Territory, is no stranger to the species: he keeps a pet croc Casey near the bar he runs and had his dog eaten by another in 2018.

Hansen told the outlet “My kingdom has the only croc-infested moat all around it,” but he recently encountered a bit of a problem when one of the saltwater crocodiles that inhabits hit (one that he’s dubbed “Fred”) got it bit too close for comfort.

As a result, Hansen was forced to fend Fred off with the help of the frying pan he used to deliver a couple of wacks that were enough to make him retreat.