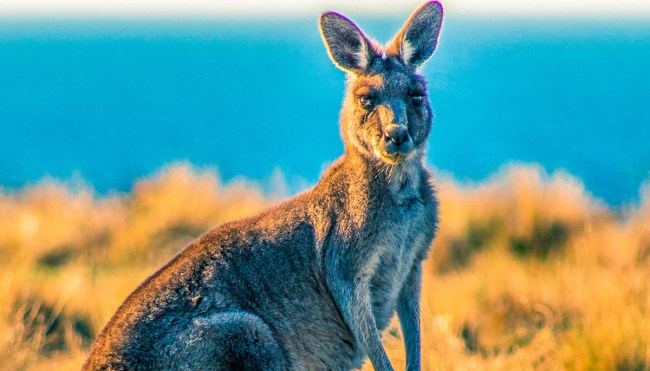 Based on what the internet has led me to believe, it would be easier to put together a list of animals native to Australia that don’t have the potential to kill you (or, at the very least, make your life incredibly miserable) as opposed to compiling the ones with the capacity to do so.

The country is home to over 60 venomous species, including the menagerie of spiders and snakes that roam the continent and the jellyfish and stonefish that lurk in the waters off the coast. Those are far from your only worries, as you also need to keep an eye out for sharks, crocodiles, and cassowaries (the giant bird anyone who’s played Far Cry 3 knows you don’t want to mess with).

You usually don’t have to keep your head on a swivel when it comes to kangaroos, but the typically docile creatures are known for mixing it up with people every now and then.

In 2016, an Australian man went viral after he was filmed clocking a kangaroo with a solid right hook after the marsupial put his dog in a headlock.

Now, we’ve been treated to another video featuring one of his fellow countrymen, who recently spent more than six minutes grappling with a kangaroo after the animal targeted the dogs in his front yard.

According to 9News, Cliff Des wasted no time jumping into action in an attempt to ward off the animal, and the 59-year-old was able to use his background as a boxing trader to his advantage before ultimately forcing the kangaroo to flee.

After the video went viral, Des appeared on Today to explain exactly what went down.

“There was a six-foot buck ‘roo trying to rip my little dogs out of the yard…I shooed it away but it didn’t want to shoo away. It put its claws up, stood on its back feet, and started chasing me.

I thought, ‘Well, I better get out of here,’ so I started running into my yard. Next thing I know, I slipped over and it’d jumped on my back. I picked up a stick…After three whacks with the stick, it snapped like a carrot.

Then I thought, ‘Well, this thing means business. It’s gonna mangle me real good.’ So I took it to the ground. It was the only way I could deal with it. I supposed if I hadn’t, it would’ve been a lot worse.

I was on the ground for about five minutes after that wrestling it. It tried to gouge my face. I put my head down, so it gouged me on the top of the head. It bit my finger, and then it actually put its back claw an inch-and-a-half in the back of my leg and shredded my pants down to the cuff.

I got my composure. After that, I sort of made an escape plan and when I ran away, it chased me around the car and the yard…He was in a nasty mood. I don’t know what was wrong with him.”

Des speculated the kangaroo may have been in search of a specific type of grass on his property and says the altercation hasn’t soured his opinion of the animals he described as “an Australian icon.”

He also suggested the best way to avoid finding yourself in the kind of situation he encountered is to just give them their space.