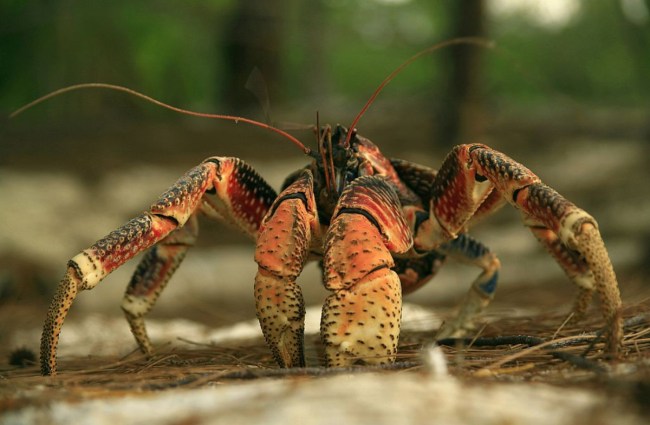 I’ve witnessed a few truly bizarre things while playing golf. I’ve seen a man get hit in the head with a drive and fall to the ground as if he were dead. I’ve watched a guy step on a hornet’s nest and run for his life. I’ve even witnessed someone hit a bird with a tee shot, but none of those things compare to what a few golfers in Australia experienced with a robber crab.

According to very in-depth research on Wikipedia, robber crabs are also known as coconut crabs and they’re the largest terrestrial arthropod in the world. After seeing the one in the video below, you’ll be able to confirm that.

They can grow up to over three feet in width and weigh up to nine pounds.

While the crabs feed primarily on fleshy fruits, nuts, seeds, and the pith of fallen trees, anything left unattended on the ground is a potential source of food. The crabs will investigate whatever is laying there and may carry it away – hence the name “robber crab.”

One particular robber crab in Australia appears to have an appetite for golf clubs.

In the truly bizarre video, a robber crab climbs up a golf bag, steals a driver, and then snaps the thing in half as if it’s a twig.

These guys are definitely taking the sight of a crab snapping a golf club a lot better than I would if it were a club in my bag.

I guess ‘I once had a driver robbed from me by a crab’ is a cool story to have in your back pocket though.

Related: Video Shows A Pride Of Lions Completely Dumbfounded By A Tiny Crab