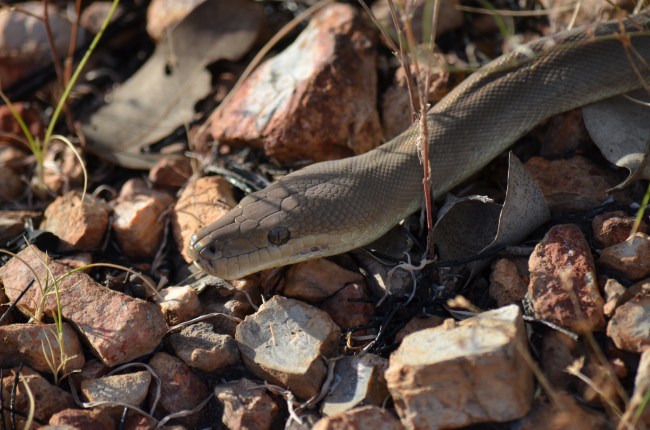 Today I saw some images that will make me cancel my upcoming camping trip and sleep with a night light for the foreseeable future. I have no one to blame but the Olive python, Australia’s second-largest snake species.

The snake, which can reach 13 feet in length, can be friendly, curious and calm if kept as pets and bred in captivity. They can also flip a switch and become the most terrifying creatures on the planet.

Gnarly images of the python unhinging its jaws to swallow a crocodile whole in a muddy swamp in  Queensland, Australia is making the rounds on social media after kayaker Martin Miller paddled by the wild scene.

GG Wildlife Rescue Inc posted the photos to its Facebook page, where they quickly went viral.

“It’s common for them to eat pretty much anything if they can fit it in their mouth.”

Ms Jones added that the pythons can ‘unhinge their jaw’ to extend their bite – and it was was not uncommon for them to attempt to eat a crocodile.

The snakes are non-venomous and are known as ‘ambush predators,’  killing their prey by constricting their bodies around it and crushing it to death.