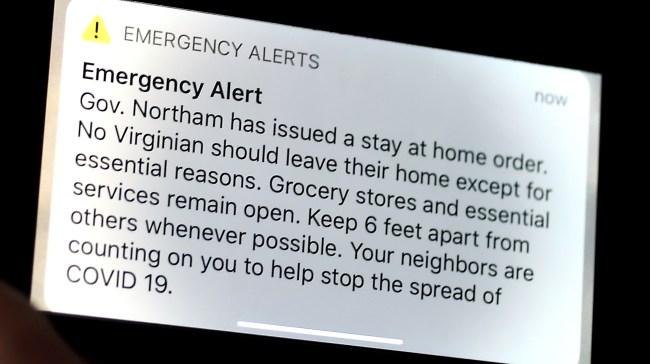 Virginia Governor Ralph Northam made what many (including myself) believe to be a horrible tactical error on Monday when he announced that the state’s stay-at-home order will be extended to June 10th.

“We are at the beginning of a period of sacrifice,” Northam said during a press conference. “This is an unprecedented and difficult time; it will be hard for people, and I understand that. But I have faith in you as Virginians. We need everyone to take this seriously and act responsibly.”

Northam added that seeing big crowds at the beach over the weekend played a part in the new order.

“You are being very, very selfish, because you’re putting all of us, especially our health care providers, at risk,” he said. “And so until today, this has been a suggestion to Virginia. Today it’s an order.”

@ virginians that decided to go to the beach over the weekend, congrats we’re on lockdown until june tenth pic.twitter.com/Ek2GZhNiM5

Even though he probably knows that it will be that long before things get back to normal, perhaps his constituents would have been better served to have him just extend the stay-at-home order until say, April 30, knowing full well that at some point between now and then he would be extending it even further into the calendar year.

Doing it that way would certainly have been more palatable and wouldn’t have caused people to lose their minds knowing they will now be forced to stay home, doing nothing, for three months.

He also put a huge dent in the hope of pretty much every other American that the pandemic will have subsided before then. Deep in our hearts most of us know that it probably won’t have, but hope is all we have at this point and we’d really like to stick with it. Couldn’t he have at least pretended?

We all laughing at JUNE TENTH like the rest of the country is not about to follow. This is going to be the first time Virginia was on the cutting edge of anything

That all being said, the cat is now out of the bag and people are having a rather rough time dealing with the potential of being housebound for another 70 days.

What the hell! Can they not take it week by week? Good grief.

VA now has a Stay At Home order until JUNE TENTH. Because a bunch of entitled idiots wouldn't stay off the beaches. It's like when the teacher would keep the whole class late bc two or three assholes wouldn't stop fuckin around.
Ya happy now? Quit fuckin around! 😡

Congrats to the dumb fucks who still decided to go partying during this pandemic. Nice, the whole fucking state is on lockdown until June 10th, JUNE TENTH. I BARELY LEAVE THE HOUSE AND THIS IS PISSING ME OFF. pic.twitter.com/aH9gT0pBXY

Stay At Home orders are extended to June Tenth because entitled defiant idiots refused to follow instructions implemented for their own safety and stay off the beach. Y I outta.👉 pic.twitter.com/QngNcm95PS

Everyone in Virginia on June Eleventh heading over to the homes of the people who went to the beaches during the weekend and forcing their governor to make the quarantine lockdown till June Tenth pic.twitter.com/31M3vavBHU

Yo Virginia just said they on housy til June 10th 🥴🥴 pic.twitter.com/mM7iUoCtFW