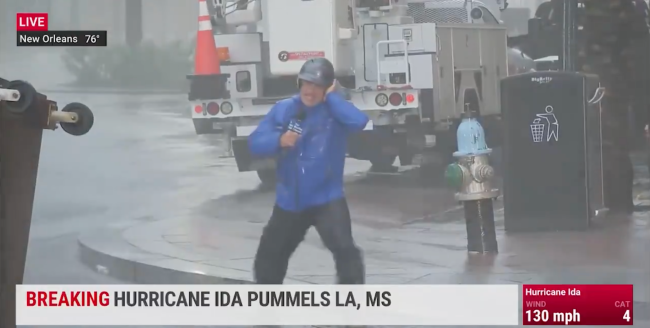 On the sixteen year anniversary of Hurricane Katrina, Hurricane Ida made landfall on the Gulf Coast and continues to leave a trail of destruction in her wake. Louisiana, Mississippi and parts of Alabama remain under a state of emergency, and more than one million people are without power.

Keep your thoughts and prayers with those who were and are in Ida’s path.

Ida first hit Grand Isle, Louisiana as a Category 4 hurricane on Sunday afternoon with winds 7mph shy of a Category 5— the strongest categorization. It weakened slightly by the time it made its way through New Orleans, but the strength and destruction of the storm is catastrophic in many parts of the Gulf states.

Ida was and is no joke. However, Weather Channel reporter Jim Cantore is the butt of many.

Cantore was stationed in New Orleans over the weekend and is receiving backlash for his coverage of the storm. His notoriety within the weather world is so profound that Louisiana didn’t want him.

Upon arrival, he was wearing a baseball helmet and looked like he was about to be blown over.

Meanwhile, people walked calmly around him.

Jim Cantore acting as if he is going to be blown away any minute while pedestrian calmly walks by. #idahurricane pic.twitter.com/ABklZp2es2

What is up with the weather channel dudes? 🤣🤣 They can hardly stand, yet 2 dudes are strolling down the street virtually unfazed? #ida #cantore #goodloe pic.twitter.com/lerICuWpfJ

Power worker from Missouri performing behind Jim Cantore of the Weather Channel in New Orleans this evening pic.twitter.com/GhKIFGCvcV

Meanwhile, you have someone doing a cartwheel behind Jim Cantore as he does his live coverage of Hurricane Ida. 🤦🏻‍♂️ pic.twitter.com/AYYbeNA148

People were straight up trolling him.

Just another normal storm for a fan of Jim Cantore 😬#Hurricane_Ida pic.twitter.com/P1JDLq97cg

I love me some Jim Cantore coverage of Hurricane Ida #twc #HurricaneIda pic.twitter.com/mb4YIMoMUg

With that all being shown, Ida is a nasty bitch and Cantore did legitimately get knocked over by the wind.

Jim Cantore is down.
I repeat: JIM CANTORE IS DOWN pic.twitter.com/8morYn0Z2x

It was Cantore’s delivery and garb that had many people either upset with or laughing at him. It was a bit much.

Our thoughts are with you, Louisiana, Mississippi and Alabama.