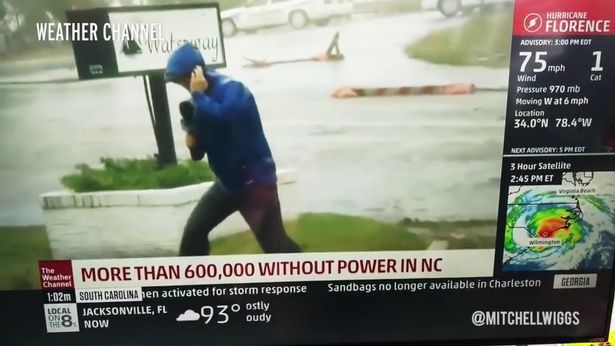 Hurricane Florence is an extremely dangerous storm that has already taken the lives of five people, more than 791,000 customers in North Carolina are without power, and when all is said and done could cause $20 billion in damage because of massive amounts of rainfall and flooding. With that being said about the seriousness of this storm, this Weather Channel reporter completely overselling the strength of the winds is hilarious.

The Weather Channel correspondent Mike Seidel was reporting live from Wilmington, North Carolina, as Florence swept through the area. Hurricane Florence, which was once a Category 4 hurricane in the Atlantic Ocean, has since been downgraded to a tropical storm by the time Seidel encountered it. The clip from Friday begins with what appears to be Seidel battling ferocious winds as he can barely stand on his feet without being swept into the air. Seconds later, two pedestrians stroll into the shot having no problem with the conditions. Then you realize that Seidel appears to be completely overdramatizing the entire situation to sell the storm’s scariness.

So dramatic! Dude from the weather channel bracing for his life, as 2 dudes just stroll past. #HurricaneFlorence pic.twitter.com/8FRyM4NLbL

Give this guy the Emmy for Outstanding Lead Actor in a Drama Series. The now viral video posted on Twitter has been Liked nearly 500,000 times and has over 18 million views.

Many people savaged the reporter for “faking” the severity of the storm to get more eyeballs on The Weather Channel.

Stupidly harmless, I guess, until you think about it. They are purposely trying to deceive their viewers into thinking the storm is worse than it is. Pretty disrespectful stuff from the Weather Channel.

I'd swear this was CNN.

The ridiculous fake it till you make it scene was even recreated with a water hose and leaf blower.

The Weather Channel defended their reporter by saying that Seidel was on “wet grass.” “It’s important to note that the two individuals in the background are walking on concrete, and Mike Seidel is trying to maintain his footing on wet grass, after reporting on-air until 1:00 a.m. ET this morning and is undoubtedly exhausted,” The Weather Channel said in a statement.

This looks bad, obviously. But FWIW, in @MikeSeidel's defense, the channel noted that "the 2 individuals in the background are walking on concrete" while he's on wet grass, and he was "undoubtedly exhausted" from constant live shots… https://t.co/KcnxW2Ejoi

Has Mike Seidel considered being a soccer player? Seems like he has what it takes.

This certainly isn’t the first time that reporters have faked weather conditions to trick viewers into thinking storms are worse than they actually are.

Reporters need to give viewers a realistic view of what’s happening not a dramatized one. pic.twitter.com/7mqO4CoSbz