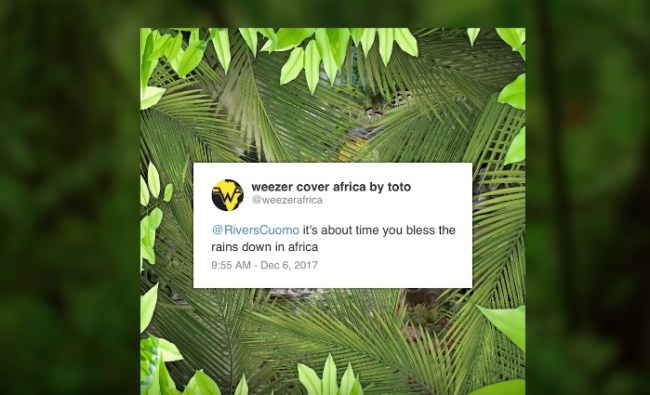 Weezer has dropped a cover of Toto’s ‘Africa’ that is the best song cover you never knew you needed (until now). It’s a great cover that both adds some Weezer elements and stays true to the original song.

From the surface, it might seem like this is just one band covering a popular 80s song but one devoted Weezer fan actually worked her ass off to get this done. That user has been waging a Twitter campaign to get Weezer to cover ‘Africa’ after she created the Twitter handle @weezerafrica.

The fan named Mary had been tweeting for months in an effort to get Weezer to cover Toto’s most popular song but all seemed lost last week when the band covered Toto’s ‘Rosanna’ instead. Spoiler alert: all was not lost. Last week, Weezer tweeted out their cover of Toto’s Africa in response to a tweet @weezerafrica and from there the Internet had the typical over-the-top reaction you’d expect. Instead of getting caught up on reactions, I’d like to just present this cover of Toto’s ‘Africa’ so you can appreciate this song for the quality cover that it is:

Steve Lukather, the guitarist, singer, songwriter, and producer of Toto, tweeted out a thank you in response to all of this hoopla:

Very flattered and thanks Weezer.

We recorded this -2nd take NO rehearsal in 1981.
Not that anyone cares.. hahaha.
We were kids. Lived in the studio working on our stuff and every session in LA. Best times ever! Hope we meet someday.
Unless you hate us. hahaha

The fan account @weezerafrica isn’t sure what’s next, they just want to enjoy this moment for a while and revel in the glory of getting Weezer to cover Toto’s ‘Africa’

i don't know what's next. just let me enjoy this for a while.#WeezerCoverAfrica

time to start holding people accountable for this https://t.co/l9t62N6U0c

As for Weezer, they’ll head out on tour beginning June 23rd in Tampa, Florida before crisscrossing across America all Summer. You can check out their tour dates here.