People All Across The Globe Are Sharing The Weirdest Foods Eaten In Their Country And WTF, Australia?! 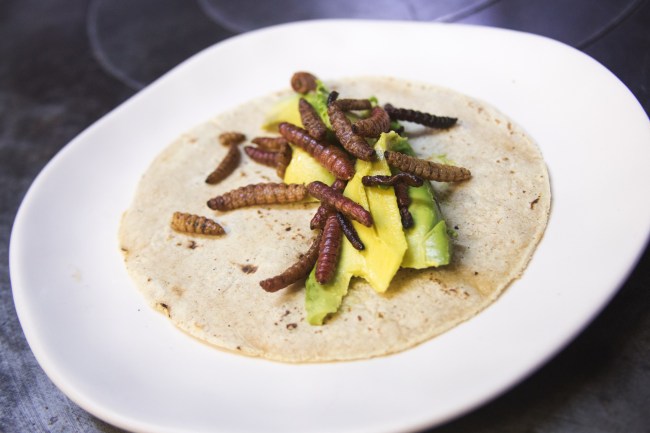 I’m always down to eat some weird stuff. I’ve eaten cow’s brain and pig’s brain. I’m chowed down on barnacles that look like dragon’s claws, tarantulas, rattlesnake, fermented shark, and all sorts of insects. I’ve also eaten some of the finest steaks on the planet and rare aged cheeses you can’t even purchase in America.

It’s not that I’m seeking out weird foods to try but I’ll certainly taste them when the opportunity presents itself which is often the case when traveling. Over on Twitter, a bunch of people began sharing the weirdest foods that are commonly eaten in their countries. In some cases, the foods are pretty damn strange. In other instances, it’s not the food that’s weird but it’s when and where they eat the food (seriously, WTF Australia?!).

What country are you from? What's the weirdest food you have there

Brought to you by State Fair all across America.

This is definitely coming to America. You can buy fried crickets at the Seattle Mariners’ stadium now all season long.

Mexico, and I think the weirdest for me is all the dishes that include insect's eggs or larvae. Ahuautle, Escamoles, etc. pic.twitter.com/lyjIJltDkQ

This makes no goddamn sense.

Australia! weirdest is probably a bunnings snag, not because there is something weird about how the hotdog is made or tatses, but simply the fact its expected of you to buy a hotdog whenever you visit a hardware store

That's just how it be down under, ur not a true Aussie u till you've helped your school raise money by sellin snags to strangers outside of huge sized shed

Germany & the weirdest food for foreigners probably is Mett.. it's just raw meat and we mostly eat it on bread.

Hard pass on this mayo dish for me.

I'm from Brazil! The weirdest one is a cornmeal with a type of giant ant (my grandma used to make me eat some in christmas). The other ones are a mayonnaise with apple and peas, and a pasta that has fish, tomatoes and eggs. All of them taste really… weird,,,

Nothing at all weird about this. All of these dishes are great.

France, and the weirdest normal food we have is eating marrow bones in stews. Or sea snails called bigorneaux. But nobody eats frog legs. That’s a myth

I had something similar in Iceland, Hakarl, which is fermented Greenland Shark that’s been left to rot underground.

in sweden we have surströmming (fermented fish), its not as bad as people think it is as long as you know what to do with it. we also have (one of my favorite foods) blood pudding which is exactly what it sounds like

I’ve never heard of this. I’d certainly give it a try.

I'm polish and I maybe flaczki? It's basically… Chopped up pieces of cow's stomach… In broth. It's a soup made out of insides. Not my favourite thing. Also kiszone ogórki. It's made probably in the same way sauerkraut is. But I promise, it's fermented but it's the best.

In Canada we've got the putting maple syrup on bacon and sausages (for breakfast). It's not *super* common but it definitely is a thing, in particular an Eastern Ontarian thing it seems.

You have my interest…

Im black and Dutch, but I have always found it weird that Dutch people eat french fries with chicken and applesauce???

— it's always halloween in this goth household🖤 (@gothboifriend) December 5, 2018

singapore, and the entirety of the salted egg craze

like telur asin, they literally use that as flavour for everything,,,,like,,,,,,,salted egg potato chips and salted egg tarts and salted egg crab im,,,,i hate it but for some reason every lady whos 30+ year old loves it

Say what now?! This might be the limit for me.

Philippines! I've never tried it but I hear lots about eating duck fetus 😖😖

You guys have anything you want to add to this list? I know we have a literal shit ton of international readers here at BroBible. Care to toss your weirdest food into the mix? Hit up the comments down below.