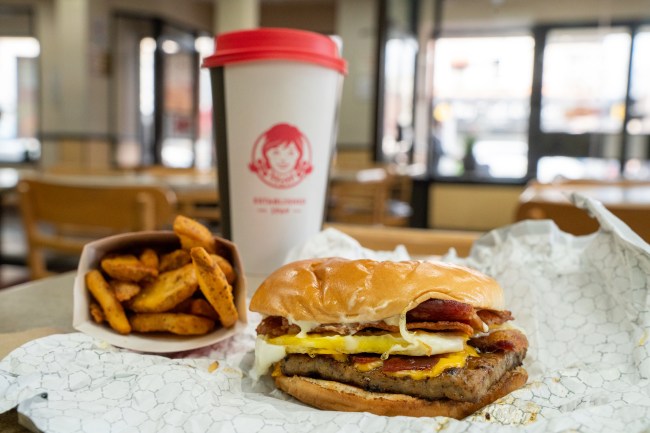 The shortage of meat in the United States as a result of the closing of meatpacking plants after hundreds of workers have tested positive for the Coronavirus is hitting popular fast-food chain Wendy’s pretty hard.

Several Wendy’s locations across the country have been forced to take hamburgers off of their menu, which led to some disappointed customers who complained on Twitter.

@Wendys how are there no burgers? pic.twitter.com/nbOnz3XOoQ

It seems like Wendy’s reliance on selling “fresh, never frozen” burgers is hurting their business more than their counterparts who have yet to be affected by the shortage.

Around 1,000, or 18%, of Wendy’s 5,500 US restaurants are not serving any hamburgers or other meat-based items, according to an analysis of online menus at every location conducted by financial firm Stephens. Wendy’s is “more exposed” to the shortage sparked by the coronavirus pandemic because of its reliance on fresh beef compared with its competitors, the note said.

Wendy’s (WEN) said some of its menu items might be “temporarily limited at some restaurants in this current environment.” The company said its delivery schedule remains unchanged, but supply has been tight because beef suppliers across North America face production challenges during the pandemic.

A Wendy’s spokesperson confirmed that several Wendys locations are going to be forced to temporarily limit their menus until the problem is resolved.

It is widely known that beef suppliers across North America are currently facing production challenges,” Wendy’s spokeswoman Heidi Schauer said in a statement to CNBC. “We continue to supply hamburgers to all of our restaurants, with deliveries two or three times a week, which is consistent with normal delivery schedules. However, some of our menu items may be temporarily limited at some restaurants in this current environment.”

While some Wendy’s locations have taken burgers completely off the menu, others are trying to limit the sale of certain items like the double cheeseburger.

Yo @Wendys my girl just picked up some burgers and was told we couldn’t order a double because of the meat shortage? But yet I can order another cheeseburger?? They messing with me?

So @Wendys told me I couldn’t order a double burger, because of a beef shortage. So the dude recommended I ordered two single burgers instead.

Now I’m not the greatest at maths. But. pic.twitter.com/KUKz1KrAGE

So according to the cashier at @Wendys, they can’t sell me a triple cheese burger because of a “meat shortage”, but they sell me 2 doubles or a double and a single. Either way you’re still giving out the same amount of meat so how is this helping the “shortage”?? pic.twitter.com/kCodGXg423