What Is Dilly Dilly? How A Viral Bud Light Catchphrase Created An Outrageously-Fun Social Media Movement

Dilly dilly! Dilly dilly! If you’ve been to a bar, tailgate, sports event, or party in the last month, there’s solid chance you’ve heard someone say that phrase while clinking beers together in a toast. It’s a perfect example of marketing catchphrase going viral and it’s all thanks to Bud Light’s late August, Game Of Thrones-inspired “Banquet” commercial, which has received heavy play during the MLB playoffs.

It’s been years since a solid beer commercial catchphrase has taken the culture by storm. I’m pretty sure the last truly great one was Bud Light’s ultra Bro-y “Whassup?” commercials from the early 2000s. But “dilly dilly” is even better than that. Here’s why:

It’s subtle. It’s silly. It sounds medieval. It’s the perfect hat-tip greeting in almost every cheerful social situation. It’s gender neutral. It’s easy to say to your friends without sounding like Workaholics Oakley-rep Stan Halen. It’s polite. It’s not filled with over-the-top machismo: You can politely throw out a “dilly dilly” to your friends while raising a glass without someone getting body-slammed through a flaming table outside a football stadium.

Yesterday, while drinking beer and watching the World Series at Big Dean’s in Santa Monica, I witnessed the magic of Dilly Dilly in real life. Two polite, 60-year-old men greeting each other with a smooth, straightforward Dilly Dilly. As proof that it’s moving the needle for the beer giant, they each ordered Bud Lights and burgers before settling in to watch one of the greatest baseball games of all time.

I just saw two old men at the bar greet each other by saying "Dilly Dilly" before fist-pounding each other. Issa movement @budlight

There’s something genuine about a catchphrase with that kind of unity. There’s also fun, geeky history behind the phrase, via the KC Star:

But “Dilly Dilly” wasn’t a pure stroke of genius out of thin air. According to dictionary.com, the origins of “dilly” are in a shortening of the word “delightful” or “delicious,” probably from the 1930s. On its own, it has come to mean “something or someone regarded as remarkable or unusual.”

The phrase could have roots even deeper in the English lexicon, though. A nursery rhyme titled “Lavender’s Blue” that dates back to the 17th century uses “dilly dilly” as part of its cadence in most of its lines. Burl Ives recorded a version of a song adapted from that nursery rhyme, which was included in the 1949 film “So Dear to My Heart.”

On social media, Dilly Dilly is catching on, too. There are over 6000 #DillyDilly posts on Instagram and the number is growing by the day. On Twitter, references to the Pit Of Misery are social media lay-ups in reference to sports teams:

I'll be using "pit of misery" for opponent penalties… 🙂 https://t.co/WyWFreHZgl

When the campaign launched in late August, Bud Light VP Andy Goeler spoke to Ad Week about the spot snowballing into a cultural movement:

“I think beer is inherently a fun product,” says Andy Goeler, a longtime Anheuser-Busch employee who took over VP duties for Bud Light in March. “It’s all about being with friends and having fun.” “This is, to me, is the personality of Bud Light,” he added, recounting classic Bud Light catchphrases like “I Love You Man.”

The new ads stick with the “Famous Among Friends” tagline. But Goeler is putting his stamp on the campaign by leaning way more into humor than previous ads in the campaign. “There’s a lot of things you can do with ‘Dilly, Dilly,'” he said, chuckling. “It’s part of the fun. That’s the Bud Light world.” He also wants the brand to be culturally relevant, he said, confirming that the script of the new ad was influenced by “Game of Thrones.”

Despite Dilly Dilly’s rising stock on social media, there are still plenty of natural-born-#DillyDilly haters…

Despite the jeers from sports media Twitterati, Dilly Dilly is taking on a life of it’s own. The toast is catching on as a reference to amusing life moments in almost all situations. It’s a phrase that embraces joy.

In an era where there’s so much hate and #HOTTAKES on social media, it’s a breath-of-fresh-air to have such a simple catchphrase generate so much happiness and fun.

Dilly Dilly is bringing America together and we’re all better for it.

Man, what a weekend. #DillyDilly

It's my Friday, Dilly Dilly

YELL IT FOR THE PEOPLE IN THE BACK. #DILLYDILLY

I'll be using "pit of misery" for opponent penalties… 🙂 https://t.co/WyWFreHZgl

Don’t take life too serious man try to enjoy it and the laughs that come long with it https://t.co/SzX9VZpjmi 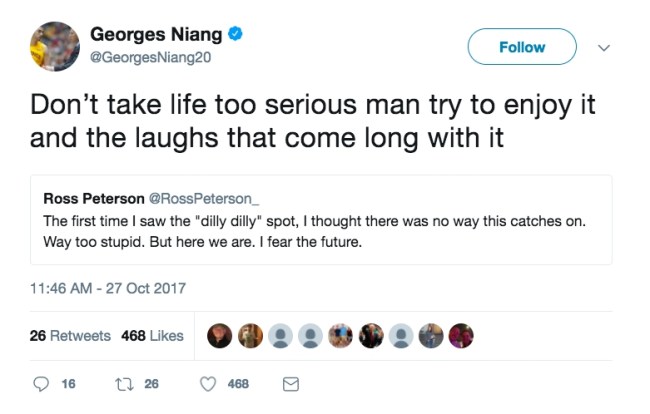 Sorry, Dilly Dilly haters: Dilly-ing is here to stay and I am so happy for it.

The dilly dilly movement makes me so happy.