What Is The Heat Dome? Deadly Once In 10,000-Year Weather Phenomenon Bringing 121 Temperatures To Pacific Northwest 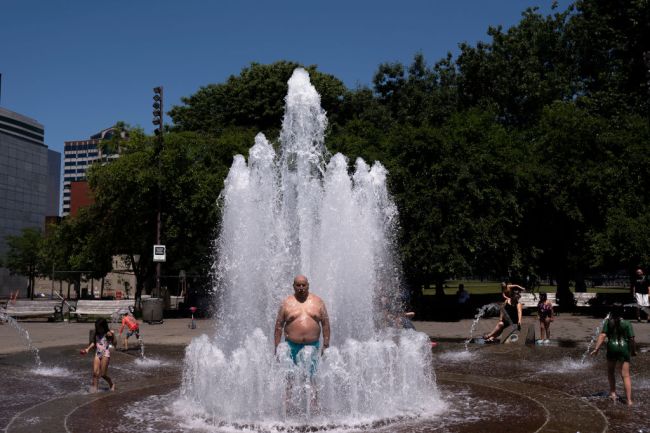 The Pacific Northwest is suffering through the region’s most extreme heatwave that has ever been recorded. Triple-digit temperatures shattered all-time weather records is caused by a “heat dome,” which the National Weather Service called “historic and dangerous.” The heat dome is a once-in 10,000-year weather phenomenon that is overwhelming the Pacific Northwest and Canada. What is the heat dome?

The heat dome is “essentially a mountain of warm air built into a very wavy jet stream, with extreme undulations,” according to CBS News, which added, “When the jet stream — a band of strong wind in the upper levels of the atmosphere — becomes very wavy and elongated, pressure systems can pinch off and become stalled or stuck in places they typically would not be.”

The National Oceanic and Atmospheric Administration (NOAA) defines a heat dome as when “strong, high-pressure atmospheric conditions combine with influences from La Niña, creating vast areas of sweltering heat that gets trapped under the high-pressure ‘dome.'”

NOAA scientists believe a “strong change (or gradient) in ocean temperatures from west to east in the tropical Pacific Ocean during the preceding winter” triggers a heat dome.

Yes, you are reading this correctly. Glowing white hot over +40°C (104°F) widely all along the western side of North America.

This is the animation in hourly detail. Let's not forget about how hot the nights will be. pic.twitter.com/N2Z4Z5O1Fd

Temperatures in the region are as much as 50-degrees over the average temperature for this time of year.

Portland, Oregon, set an all-time high temperature of 108°F on Saturday, set a new record on Sunday with 112°F, but then had that record smashed on Monday with a high of 116°F.

Seattle, Washington, hit a record-breaking temperature of 104°F on Sunday, but then broke the record on Monday with a sweltering 108°F temperature. Making matters worse is that only 33% of people in Seattle have air conditioning.

To our followers in the Northwest, how hot has your city gotten? 🤔

Stay safe up there! Heat alerts in the region remain active through the #July4th weekend. pic.twitter.com/UzwDQPusnO

The intense heat caused the pavement to crack near Spokane, Washington, where there were also rolling blackouts.

We've started to see pavement buckle on US 195 north of Colfax. This is at MP 57 near Thornton. The roadway is currently open. Crews anticipate beginning repairs early Wednesday morning at 4 a.m. Please use caution through the area. pic.twitter.com/dN9vkdh47e

The fiery heat melted power cables in downtown Portland, which shut down the Portland Streetcar service.

In case you're wondering why we're canceling service for the day, here's what the heat is doing to our power cables. pic.twitter.com/EqbKUgCJ3K

The blistering heat is baking the entire West Coast, except for San Francisco.

Canada is also feeling the wrath of the heat dome, obliterating previous high-temperature records. Lytton in British Columbia tied an all-time record on Saturday with 113°F, then surged to 116°F on Sunday, only to have the all-time record eclipsed on Tuesday with an insanely furnace-like temperature of 121°F.

There were 233 deaths reported between Friday and Monday in British Columbia during the “unprecedented” heatwave, which has equated to “disastrous consequences,” according to the region’s premier John Horgan. The area normally has 130 deaths in four days.

The World Meteorological Organization (WMO) issued a warning that the heatwave is melting glaciers and high altitude snow cover in the Canadian Rockies, which could pose a landslide risk.

Temperatures are expected to return to the 90s in the Pacific Northwest this week, but record-breaking heat will last all week in the interior portions of the area.