What Makes High-End Wine So Expensive? Here’s Why Romanée-Conti Costs $16,000 A Bottle 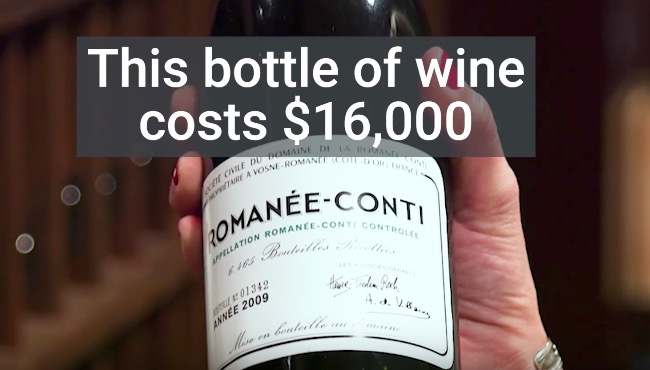 The world of high-end wine is endlessly fascinating. It’s dominated by old world money and wineries that can be traced back longer than the United States of America has even been a country. From the outside, fascination with high-end wine might just seem like a hobby for rich people who need something to spend money on, and while that might be the case for some wealthy wine enthusiasts that’s not at all what makes the industry tick.

Domaine de la Romanée-Conti released its first vintage in the year 1232. It remained under the ownership of the Abbey of Saint Vivant in Vosne until 1631 when it first changed hands. That’s over 400 years of the same ownership and over 200 years took place before Christopher Columbus was even born.

Manhattan’s Del Frisco’s Double Eagle Steak House is one of the best steakhouses in the city. A lot of people will claim it is the best. No great steakhouse is complete without a wine cellar full of rare wines, and Del Frisco’s Double Eagle Steak House has one of the finest collections in America. Del Frisco’s wine director Crystl Horton spoke with Business Insider to explain what makes the Domaine de la Romanée-Conti so exquisite. This particular vintage sells for $16,000 a bottle, and here’s her explanation of what makes that so:

With only 450 cases of Romanée-Conti produced annually, I think it’s safe to say that most people will never taste this exquisite wine. This is a supply-demand issue. There’s a ton of demand for a wine that even the wealthiest individuals cannot get their hands on because there are so few cases produced. This drives the price up year after year because it’s both rare and it’s supposed to be an exquisite wine.