What’s New On Amazon Prime Video In October: ‘In Search Of Greatness, Thursday Night Football,’ Season 3 Of ‘Goliath’ And More 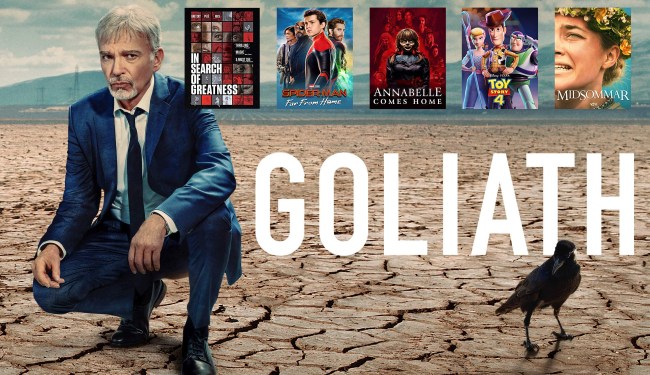 Anyhoo, speaking of the internet and streaming services, check out what’s new on Amazon Prime Video for the month of October 2019.

October brings seven Amazon Original series exclusively available for Prime members to stream or download at no additional cost to their membership.

• Costume Quest – Season 1b: Wren, Reynold, Everett and Lucy are back with new costumes, powers, and some unlikely friends. As Halloween draws closer, they realize they aren’t just defending their small, sleepy town, but the entire world. With evil Bob Dickerson and his army of monsters growing stronger by the day, the young heroes newfound responsibilities – as well as the very fiber of their friendship – will be put to the test.

• If You Give a Mouse a Cookie – Halloween Special: It’s Halloween and Mouse is excited about costumes, trick-or-treating, and most of all, what promises to be Cat’s most amazing “Halloween Spooktacular” ever! But before the show can go on, Cat’s robotic ghosts get loose and go flying around the neighborhood. Can Mouse and his friends go on a robo-ghost-roundup without spooking themselves, or worse, poor Moose, who finds Halloween the scariest day of the year? A high-flying adventure ensues, taking them to a twisty maze and helping Moose see the fun in Halloween as he saves the day and makes a Spooktacular appearance.

• Goliath – Season 3: The unexpected death of an old friend leads Billy McBride to take a case in the drought-stricken Central Valley where he comes face-to-face with a new Goliath: a billionaire farmer and his sister and their scheme to steal California’s most valuable resource – water. As Billy and his team pursue the truth, old enemies and personal demons resurface forcing him to confront his own mortality.

• Jestination Unknown – Season 1: Vir Das travels across India with his friends in an attempt to answer the question: “What does India find funny?” The clubs and pubs of India’s metros are only a part of the answer. The people of India have laughed at kings, foreigners, neighbors, and more importantly, themselves. In a time when jokes are considered offensive, what if India answered otherwise?

• Just Add Magic: New Protectors – Special: The Magic Cookbook has appeared in a new town with new protectors! Kelly, Darbie, and Hannah must now travel to Bay City to train the new trio on how to handle the recipes and the dangerous downsides. What they find is that the new protectors aren’t even friends let alone ready to trust and use magic.

• Modern Love – Season 1: An unlikely friendship. A lost love resurfaced. A marriage at its turning point. A date that might not have been a date. An unconventional new family. These are unique stories about the joys and tribulations of love, each inspired by a real-life personal essay from the beloved New York Times column “Modern Love.”

Football fans will also be able to catch Thursday Night Football, starting with the Rams at Seahawks on October 3, all at no additional cost.

NEW IN OCTOBER – AVAILABLE FOR RENT OR PURCHASE ON PRIME VIDEO