What’s New On Netflix In October: ‘You, Escape The Undertaker, Locke & Key’ And More 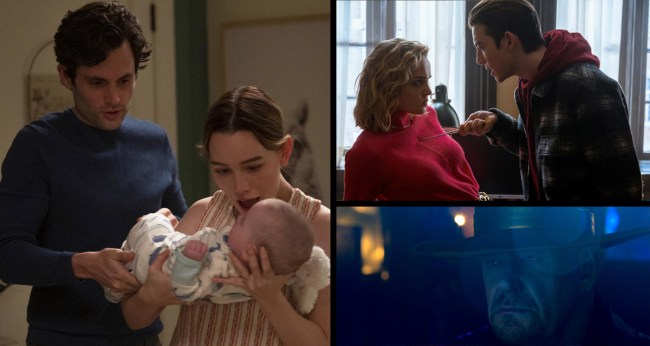 Throughout the past year and a half of uncertainty and worry, one thing has remained the same and that’s the comfort that comes from watching streaming services. Speaking of which, here’s what’s new on Netflix in October (as well as what will be leaving the service).

Some highlights of what’s new on Netflix in October include Netflix Originals like the third season of You, Escape The Undertaker, Locke & Key and Sexy Beasts.

Better hurry though on some other titles, because despite all everything that’s new on Netflix in October, several shows and movies like Catch Me If You Can, The Da Vinci Code, Ferris Bueller’s Day Off, Inception, Angel Has Fallen, and Legally Blonde will be going to be going, going, gone in October.

Check out the rest of what’s new on Netflix in October, as well as what’s leaving the service…

October 1
A Sinister Sect: Colonia Dignidad — Netflix Documentary
Diana: The Musical — Netflix Special
Forever Rich — Netflix Film
MAID — Netflix Series
Paik’s Spirit — Netflix Series
Scaredy Cats — Netflix Family
The Seven Deadly Sins: Cursed by Light — Netflix Anime
Swallow — Netflix Film
A Knight’s Tale
An Inconvenient Truth
Are You Afraid of the Dark?: Season 1
As Good as It Gets
Awakenings
B.A.P.S.
Bad Teacher
The Cave
Desperado
The Devil Inside
Don’t Be a Menace to South Central While Drinking Your Juice in the Hood
Double Team
The DUFF
Eagle Eye
Endless Love
Ghost
Gladiator
Hairspray (2007)
The Holiday
Jet Li’s Fearless
The Karate Kid (2010)
Lara Croft Tomb Raider: The Cradle of Life
Léon: The Professional
Malcolm X
Observe and Report
Once Upon a Time in Mexico
Project X
Robin Hood: Prince of Thieves
Rumor Has It…
Seinfeld: Seasons 1-9
Serendipity
Spy Kids
Spy Kids 2: The Island of Lost Dreams
Spy Kids 3: Game Over
Step Brothers
The Ugly Truth
Till Death
Titanic
Tommy Boy
Unthinkable
Waterworld
Zodiac
The Guilty — Netflix Film
911 operator Joe Baylor (Jake Gyllenhaal) works relentlessly to save a caller in grave danger — but soon discovers that nothing is as it seems, and facing the truth is the only way out. Directed by Antoine Fuqua.

October 5
Escape The Undertaker — Netflix Film
In this interactive film featuring WWE Superstars, The Undertaker has set a trap for the decorated tag team The New Day at his mansion. What they don’t know: The Undertaker’s mansion is an extreme Haunted House, packed to the brim with supernatural challenges. It’s up to viewers to decide the fate of these three poor souls trying to survive the wrath of The Undertaker.

October 7
Sexy Beasts: Season 2 — Netflix Series
​​The Way of the Househusband: Season 1 Part 2 — Netflix Anime
The Billion Dollar Code — Netflix Series
In 1990s Berlin, an artist and a hacker invented a new way to see the world. Years later, they reunite to sue Google for patent infringement on it.

October 14
Another Life: Season 2 — Netflix Series
​​In the Dark: Season 3
One Night in Paris — Netflix Film

October 15
CoComelon: Season 4
The Forgotten Battle — Netflix Film
The Four of Us — Netflix Film
Karma’s World — Netflix Family
Little Things: Season 4 — Netflix Series
My Name — Netflix Series
Power Rangers Dino Fury: Season 1
Sharkdog’s Fintastic Halloween — Netflix Family
The Trip — Netflix Film
You: Season 3 — Netflix Series
In Season 3, Joe and Love, now married and raising their baby, have moved to the balmy Northern California enclave of Madre Linda, where they’re surrounded by privileged tech entrepreneurs, judgmental mommy bloggers and Insta-famous biohackers. Joe is committed to his new role as a husband and dad, but fears Love’s lethal impulsiveness. And then there’s his heart. Could the woman he’s been searching for all this time live right next door? Breaking out of a cage in a basement is one thing. But the prison of a picture-perfect marriage to a woman who’s wise to your tricks? Well, that’ll prove a much more complicated escape.

October 19
In for a Murder / W jak morderstwo — Netflix Film

October 22
Adventure Beast — Netflix Series
​​Dynasty: Season 4
Inside Job — Netflix Series
Little Big Mouth — Netflix Film
Maya and the Three — Netflix Family
More than Blue: The Series — Netflix Series
Roaring Twenties — Netflix Documentary
Locke & Key: Season 2 — Netflix Series
After their father is murdered under mysterious circumstances, the three Locke siblings and their mother move into their ancestral home, Keyhouse, which they discover is full of magical keys that may be connected to their father’s death. As the Locke children explore the different keys and their unique powers, a mysterious demon awakens — and will stop at nothing to steal them. From Carlton Cuse (Lost, Bates Motel) and Meredith Averill (The Haunting of Hill House), Locke & Key is a coming-of-age mystery about love, loss, and the unshakable bonds that define family. Locke and Key on Netflix is the television adaptation of the best-selling comic book series by Joe Hill and Gabriel Rodriguez for IDW Entertainment and returns this October for Season 2.

October 24
We Steal Secrets: The Story of WikiLeaks

October 1
Death Race: Beyond Anarchy
Tales From the Hood 2