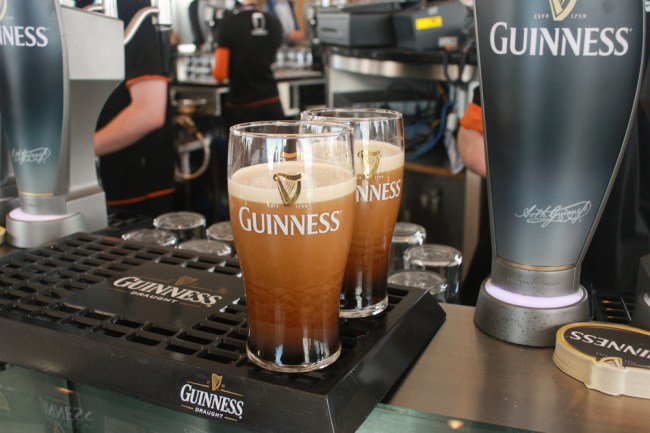 Have you ever been drinking a thick stout and found yourself wondering just how in the heck the bubbles in the beer appear to be floating downward instead of up and out of the pint glass like physics intended? The tiny beer bubbles are meant to float up because the gas that fills these bubbles are lighter than the liquid around them. But that’s not always the case with thick stouts using roasted barley and Nitrogen instead of CO2. The Nitrogen bubbles are smaller than the CO2 but they should still float upward.

The mystery of why beer bubbles appear to float down in some stouts is something that physicists have been studying for years. This isn’t just some random bar argument that was settled when a scientist stepped in with a simple explanation. At first, physicists weren’t even sure if the bubbles were floating down. They had to first determine that it wasn’t an optical illusion. That’s actually what led to the most recent explanation.

University of Huddersfield professor of mathematics William lee published a recent study in the American Journal of Physics and here’s what he found (via TIME):

Lee’s most important finding is that — never mind the evidence of the videotape, the computer models and your own eyes — the sinking bubbles actually are just an optical illusion. Sort of. Beer bubbles will indeed always rise relative to the liquid in which they form, but some of that liquid is circulating downwards relative to the glass. Draw an imaginary line in the liquid and the bubbles rise past it; draw it on the glass and they sink below it. The phenomenon is especially pronounced if the beer is poured into the so-called tulip glasses in which stouts are typically served—glasses with a narrower base and a wider mouth.
Once a beer is poured, Lee explains, bubbles ascend in a more or less straight line, even as the tulip glass steadily widens. That leaves a region of beer close to the walls of the glass with a lower concentration of bubbles. Beer with less gas is denser than beer with more, and that region of beer thus sinks, carrying the nearby bubbles with it, relative to the glass. As the beer settles in the narrower bottom, the bubbles, which are now more concentrated, rise up en masse, and the cycle repeats itself. (via)

The lengthier explanation of this phenomenon over on TIME is actually pretty fascinating. I didn’t expect to be so entertained by beer science on this otherwise mundane Tuesday afternoon but this was an excellent turn of events. So I’d highly suggest clicking here and reading the full article.