Eggs Benedict Is The Undisputed G.O.A.T. Of The Brunch Menu And You’re Doing Yourself A Disservice If You Disagree 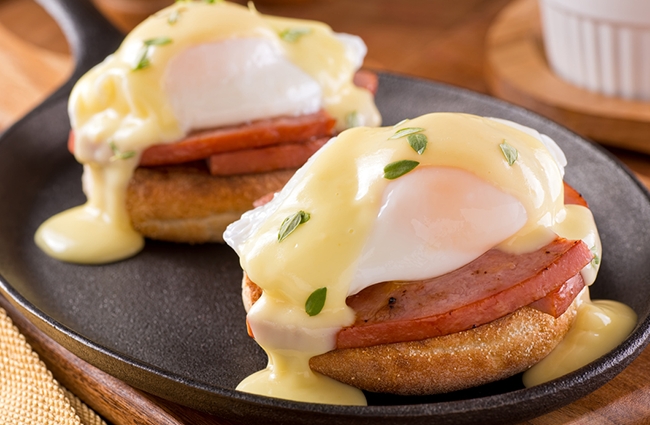 Historically speaking, you’re not going to get very far in life if you don’t eat food on a regular basis and I think most people end up developing a preference when it comes to what’s typically served up at the three main meals associated with certain hours of the day.

There are some people who roll out of bed and prepare to take on whatever lays ahead by treating themselves to breakfast (thanks in no small part to the kickass PR team that managed to convince countless individuals it’s “the most important meal of the day”). Plenty of others prefer to have a relatively meager bite when they arise or skip it entirely, opting instead to save their appetite and spend the morning counting down the hours until the casual lunch they rely on to break up the workday or looking forward to the comparatively formal dinner that awaits them at the end of it.

Most people look at this as a three-horse race but you’d be foolish to ignore the sleeper that has been slowly but surely closing the gap: brunch, the bastard child spawned from the marriage of the two traditional meals that comprise the portmanteau that has staked an increasingly legitimate claim to the throne in recent years.

Brunch is still a fairly polarizing meal, as it’s been embraced with open arms by Instagrammers around the world but still has plenty of work to do when it comes to winning over people who reflexively despise anything linked with influencer culture in addition to traditionalist who also probably hate Cookie Crisp for normalizing the consumption of dessert during the A.M. hours of the day.

As someone who likes breakfast as much as I hate having to wake up during the time frame it’s linked with if I don’t want society to view me as a deadbeat, I’m personally very pro-brunch. As far as I’m concerned, its ability to blur the line between the two of your more “standard” meals has made the menu associated with the hybrid the most formidable lineup you’ll ever encounter on a restaurant menu.

Sure, you might not know exactly what to expect if you roll into a random dining establishment to grab one of the “Big Three” meals, but for the most part, you know they’re going to be offering a certain lineup of items that people have come to expect to be served at each of them. For example, if you sit down for breakfast and the server hands you a menu, you shouldn’t be too surprised if you can’t find spaghetti and meatballs listed anywhere. Everyone knows that’s a dinner food and you should honestly be a bit suspicious if you do encounter it alongside your typical early morning offerings.

But what exactly is brunch food? Well, it’s basically whatever the hell you want, which is exactly what makes it so magical. However, restaurants just can’t throw anything they want on the menu, as brunch is less of a meal and more of an event that requires them to differentiate themselves from the competition, which has subsequently resulted in it becoming the equivalent of a culinary all-star game.

Everything featured on the brunch roster needs to earn a spot, as it’s a place where the best of the best show off what they’ve got while going head-to-head with some of the most formidable players in the game. This is especially true at buffets where you’ve got crab legs sitting next to piles of bacon located next to the build-your-own-omelet stations—no, experiences—all vying for a place in the stomach of diners who have already allotted a chunk of real estate to the all-you-can-drink mimosas, Bloody Marys, and bellinis that flow like the waters of Niagra Falls.

It can be hard to stick out with the sheer amount of star power on display but I’m of the opinion that there’s one undisputed MVP that manages to outshine all of its talented peers. I am, of course, talking about the brunch (and breakfast) G.O.A.T. that is Eggs Benedict.

French toast can take a seat. Quiche can go pound some sand. Oatmeal? It shouldn’t have even gotten the invite in the first place. In the end, this is Eggs Benedict’s world and everything else is just living in it.

So what makes Eggs Benny so perfect? Well, you’ve got poached eggs (undoubtedly the superior preparation option) perched atop a throne of Canadian bacon supported by an English muffin. The international element provides the dish with an unparalleled level of refinement that’s only further elevated by a healthy coating of Hollandaise sauce, which is perhaps second only to the bidet as the best thing the French have ever introduced to the world.

One of the hardest things about talking about food is that flavor is ultimately subjective. There are certain things I might find delicious that you may consider an affront to your tastebuds so offensive that you would’ve challenged me to pistols at dawn if we still lived in a time where that was viewed as an acceptable way to settle disagreements. However, the individual elements that combine to make Eggs Benedict such a force to be reckoned with elevate it to a level where anyone who can’t appreciate its brilliance is objectively bad at eating.

Another feature that sets Eggs Benedict apart is that it is almost exclusively served in pairs, meaning there’s almost always a second one waiting for you so you don’t have to grapple with the sadness that comes with scarfing down the main attraction too quickly. Sure, you can usually add a patty to a burger or order an extra egg to stave off the disappointment that comes with finishing other foods but this is a perk that shouldn’t be overlooked.

Unfortunately (as is the case for anything that’s almost impossible to make better), some people possess a certain hubris that leads them to believe they can improve on perfection, like that lady who messed up the Jesus painting in Spain or whoever decided it would be a good idea to remake The Three Stooges.

Nothing is more frustrating than rolling up to a restaurant for brunch and realizing the chef had the gall to put their own “spin” on a classic that doesn’t require one. Eggs Benedict doesn’t need a slice of tomato serving as an Iron Curtain separating the egg from the Canadian bacon. Hollandaise sauce isn’t broken and subsequently can’t be “fixed” by adding chipotle. I’m not even going to address the whole “salmon” thing because it doesn’t even deserve to be acknowledged. Hell, it’s probably only a matter of time until a rogue cook decides to replace the English muffin with a Pop-Tart in an attempt to get featured on Food Network.

Shame on all of them.

You may think the Eggs Benedict lobby promised me a fat check in exchange for me singing its praises but I promise I’m simply spreading the good word in an attempt to show the light to anyone who’s been living in the dark for far too long. If you can’t remember the last time you paid your respects to this brunch juggernaut, I highly suggest you do so the next time you get the opportunity. Can I promise you’ll thank me later? No, but you know where to find me when you inevitably feel the urge to.