Here’s Why The Front Of Engines On Airplanes Are Unpainted 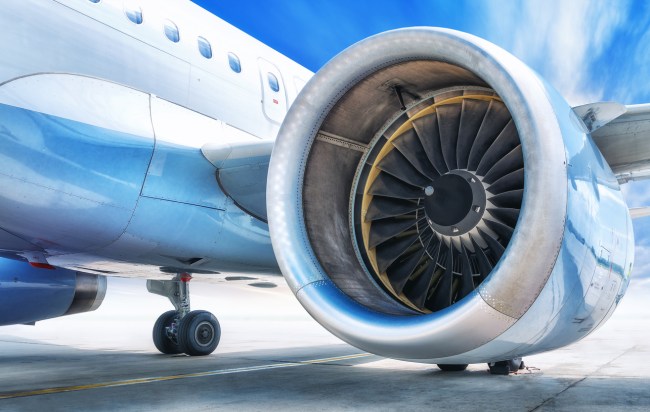 Airliners can travel at an altitude of 40,000 feet, where temperatures can be a bitterly freezing -70 degrees Fahrenheit. Plus, the planes are cruising through clouds full of moisture that could form ice all over the plane. An airliner engine has a lot of parts that, if they became frozen or had ice accumulate, could present a real problem. One of those areas is the front casing of the plane’s engine.

Airliners also have de-icing systems to prevent catastrophic malfunctions. Hot air is pushed from the engine to hollow areas in the front of the intake edge to prevent ice from forming.

YouTube channel Mentour Pilot explains that the front of the engine is made of metal, and metal is an excellent heat conductor. Painting over the metal on the intake would cut down on the surface area, getting warm from the turbine burning up hot jet fuel. There is also the much less worrisome issue of paint chipping off and being swallowed by the engine or the front of the housing becoming uneven because of a damaged paint job.

To prevent the airliner’s wings from becoming a block of ice, there is an engine bleed valve that has a duct that takes hot air from the engine to the wings to prevent icing, according to the YouTube channel Captain Joe.

Now you have a fun science fact to tell so you sound smart when you’re getting bored to tears by your girlfriend’s humdrum cousin at your New Year’s Eve party.

Want more explainers on airplanes? We answered these questions of flying and airliners:

Here’s Why We Board Airplanes From The Left Side

Why Are Airplanes Usually White?

This Is Why Airplane Windows Have Tiny Holes