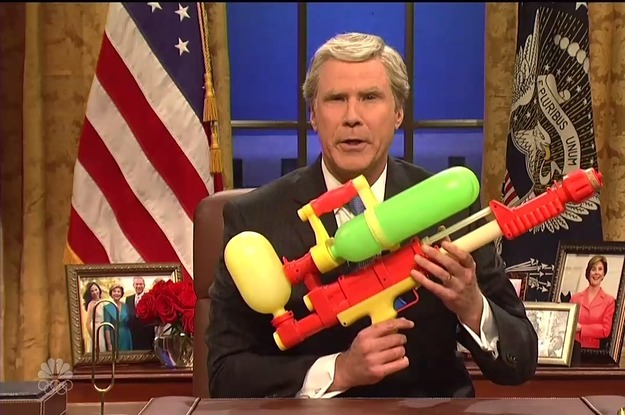 “According to a new poll, my approval is at an all-time high,” Ferrell’s version of Dubya said. “Donny Q. Trump came in and suddenly I’m looking pretty sweet by comparison. The point is, I’m suddenly popular AF. At this rate I might even end up on Mount Rushmore, right next to Washington, Lincoln — and I want to say Kensington.”

In the show’s cold open, Ferrell’s Bush gave his speech from the Oval Office, which is actually a set of the Oval Office he had built in his basement in Texas so he could “pretend to still be president sometimes.” “Don’t forget, we’re still in two different wars that I started,” Ferrell’s Bush boasted. “What has two thumbs and created ISIS? This guy.” Bush bragged about surviving being attacked by shoes during a press conference and how his Vice President, Dick Cheney, literally shot someone in the face while hunting. The skit ends with Bush and his former Secretary of State Condoleezza Rice, played by Leslie Jones, singing the All in the Family theme song, Those Were the Days.