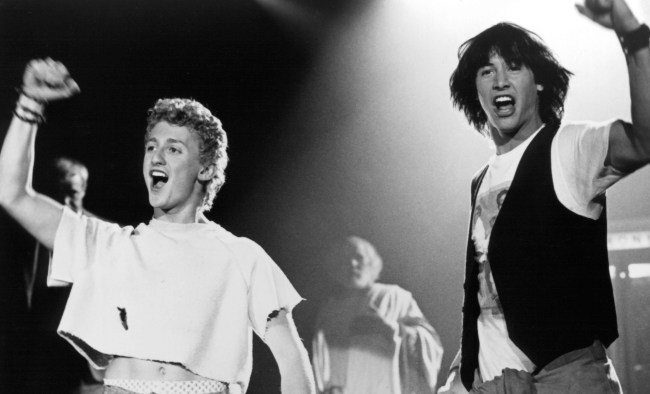 The last time Keanu Reeves and Alex Winter got together for a Bill & Ted movie was way back in 1991 for the sequel to Bill & Ted’s Excellent Adventure, Bill & Ted’s Bogus Journey.

In the ensuing 28 years, there has been much speculation about and a strong desire from fans for Bill S. Preston, Esq. and Theodore “Ted” Logan to reunite for a third adventure.

Back in 2012, it was revealed that the original writers, Chris Matheson and Ed Solomon, had already submitted a script for a third film. Keanu Reeves had seen it and talked about it a little bit in an interview with GQ.

One of the plot points is that these two people have been crushed by the responsibility of having to write the greatest song ever written and to change the world. And they haven’t done it. So everybody is kind of like: “Where is the song?” The guys have just drifted off into esoterica and lost their rock. And we go on this expedition, go into the future to find out if we wrote the song, and one future “us” refuses to tell us, and another future “us” blames us for their lives because we didn’t write the song, so they’re living this terrible life. In one version we’re in jail; in another we’re at some kind of highway motel and they hate us.

And then, after that… nothing. Nothing happened… for six years.

Then, in 2018, Solomon revealed that he was back working on the third Bill & Ted movie and the film’s stars, Reeves and Winter, said they were totally down to do it again.

Fast forward a little over a year and the third film, titled Bill and Ted Face the Music, was finally made official.

The world is about to get a lot more excellent. Watch this special announcement from your two favorite dudes! 8.21.20 🎸⚡️ pic.twitter.com/miOtBhinlC

On my wall in the production office. pic.twitter.com/td2vx0p1Ow

And on July 1, production on Bill and Ted Face the Music finally, at long last, began.

Day one. See you on the other side and remember to be excellent 🎸🎸@BillandTed3 pic.twitter.com/BHFQfsW7bd

Are you ready for a clean-shaven Keanu Reeves? Because, boom…

Back to Ted! Keanu Reeves was spotted on the set on the first day of filming of the long-awaited and hotly anticipated third installment of the franchise, Bill & Ted Face the Music : The 54-year-old actor was freshly shaven as he stepped out in New Orleans pic.twitter.com/RkuhrYIsBE

According to Reeves, Bill & Ted 3 will be set about 25 years after the last movie and are warned by someone from the future that they still need to write the song that was supposed to unite the world and bring peace, but still haven’t written.

Bill and Ted Face the Music is scheduled for release on August 21, 2020.