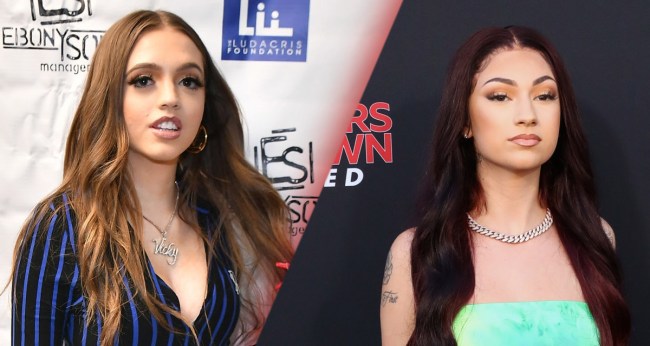 Popular Instagram personality Woah Vicky and Danielle Bregoli, AKA Bhad Bhabie, AKA The ‘Cash Me Ousside’ Girl, got into a knockdown, drag-out fight Tuesday night, reportedly at the Loud House Studios in Atlanta and because this is 2019 the brawl was, of course, caught on video.

And when I say brawl, I mean brawl as Woah Vicky, real name Victoria Waldrip, went full MMA on Bregoli, pulling off some impressive ground and pound while Bregoli shouted “Is this hoe crazy?”

Apparently this beef has been brewing for awhile as Complex reports Bregoli had previously confronted Woah Vicky and challenged her to a fight last April, even attempting to throw a punch at Vicky back then.

According to The Blast, Woah Vicky was recording with local ATL rapper Lil Gotit when Bhad Babie, aka Danielle Bregoli, showed up and the fisticuffs began.

In an Instagram Story following the fight, Bregoli claimed that Vicky didn’t land any punches.

“Why you don’t just pull up with no dudes… nobody holding nobody back lol have fun editing your video😂😂,” Bregoli wrote. “You live for the internet talking i anit [sic] doing nun of that yk where u b pull up like I did show me u bold my dudes anit [sic] gon hold shit back. Y’all see shorty holding my hair throwing and missing what are y’all tryna prove you see dude holding us back 😂😂 I told her pull up where I’m at with by herself and she won’t!”

“I told her to pull up so there would b no dudes to hold no one back and she won’t comes so plz tell me again who’s really the p**sy???” Bregoli continued. “Y’all are forgetting I was being held back which is why shorty was able to get on top of me in the first place and threw punches and still missed while I’m right under u like how tf that work??? Yk what studio I’m at pull up and see me on your OWN!!!”

Vicky posted a clip of the fight to her 2.5 million Instagram followers merely with the caption, “Hmm.”

Take a look and see if she actually “missed” as Bregoli claims.