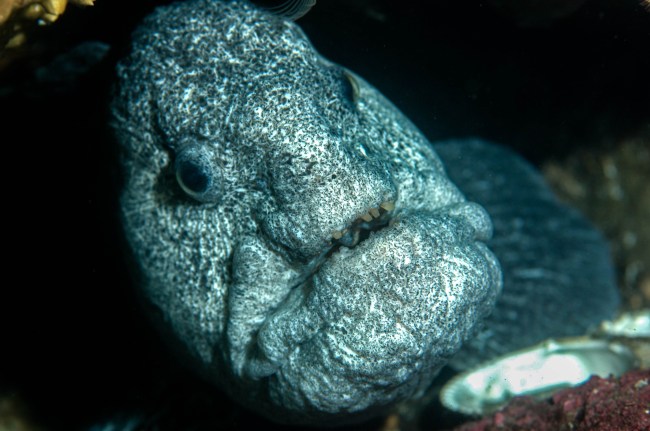 I haven’t really spent all that much time fishing in the Pacific Ocean, at least not in California. I’ve only been offshore fishing in Cali twice but I’ve spent a solid chunk of time fishing down in Costa Rica and Panama.

Unfortunately for me, I haven’t run up against one of these gnarly Wolf Eels yet because they look awesome. I’d love to see one up close. I did foul hook a moray eel in Costa Rica a few years ago with the hook straight through the eels back. I snagged it while we were fishing for Roosterfish. Getting that eel into the boat was the easy part, getting the hook out of a completely pissed off eel that measured several feet long was not easy and everyone on the boat was losing their shit.

That day in Costa is all I can think of when I watch this clip of a fisherman out of Dana Point trying to wrangle this Wolf Eel. I came across this clip via For The Win and it’s pretty great:

Here’s some more footage from Instagram of this peculiar species:

Here’s what For The Win has to say about this species:

While they possess dangerous canine teeth and molars, and jaws designed to crush the hard shells of prey, they’re rarely aggressive toward humans and are a prized sighting for scuba divers.

They reside mostly in rocky caves and crevices, where they prey on invertebrates such as crabs, clams, mussels and urchins. But wolf eels also will ambush small fish.

I guess that explains why you don’t often see these freakish looking fish caught on rod and reel.