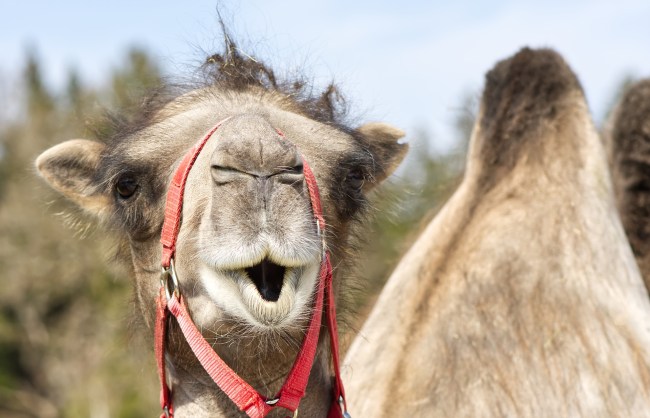 A couple of years ago, I traveled across the country from Colorado to the East Coast for reasons I swear have nothing to do with drug smuggling, and during the trip, I resisted the urge to stop at a number of roadside attractions ranging from the world’s largest ball of twine to a reproduction of Stonehenge made entirely of cars.

However, the same can’t be said for the couple who visited the Tiger Truck Stop in Louisiana in order to check out the animals it has to offer—including a camel named Casper.

According to The Washington Post, a woman and her husband were checking out Casper when he decided it would be a good idea to throw some of their dog’s treats into the enclosure which (shocker) caused their pet—which is deaf—to hop over the fence in pursuit of them.

When the dog failed to respond to their calls for reasons the last sentence should have made clear, the couple took a look at the options and decided the best solution was to ignore the “No Trespassing” sign and crawl under the barbed-wire fence in an attempt to retrieve their pet.

It’s safe to say it didn’t work out like they intended.

After entering the cage, the man started hitting Casper much to the chagrin of the camel, who decided to defend himself by sitting on the woman, which seems like a pretty reasonable reaction.

However, I don’t know if the same can be said for the woman’s reaction: biting Casper in the balls.

It may have been unconventional but it managed to do the job, as the camel got off of her and the couple and their dog managed to escape relatively unscathed (an employee of the roadside zoo says Casper also appears to be uninjured).

Thankfully, the camel was cleared of all wrongdoing but the same can’t be said for the two geniuses who antagonized him, as they were charged with trespassing and cited for not having their dog on a leash.

I love when a story has a happy ending.