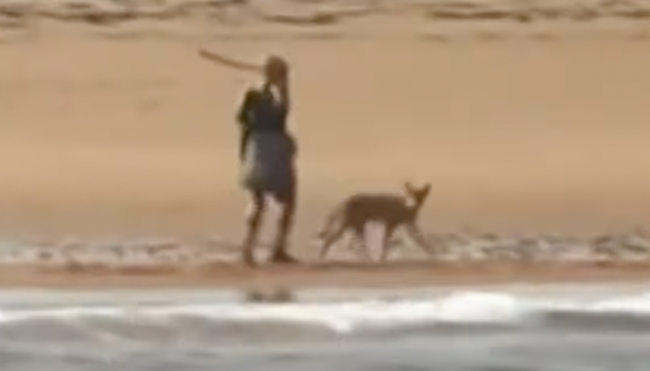 It’s not super rare to walk down a beach and stumble upon someone holding a stick with a dog at their side, so when a couple of fishermen off the coast of Cape Cod recently saw a woman who appeared to be doing exactly that, they probably didn’t think they’d come across anything out of the ordinary.

However, upon further investigation, they realized the canine in question wasn’t a dog but rather a coyote that spent a full 10 minutes stalking Marcy Sterlis, a New York City resident who was hoping to unwind a bit by taking a vacation to Provincetown only to find herself repeatedly winding up to use the stick she picked up to keep the animal on Race Point Beach at bay.

After hearing her cries for help, Bill Kelley and Andrew DeCarton called 911 and piloted the fishing boat they were aboard toward the sand. They repeatedly slammed an oar against the vessel in an attempt to scare the coyote off to no avail, but they were eventually able to get close enough to the beach to bring Sterlis aboard and safely return her to shore.

CBS Boston spoke to a wildlife expert who says he believes people had previously fed the coyote food and suggested the animal was hoping Sterlis would do the same—so if you somehow needed to be reminded feeding wild predators is a bad idea, I hope this will do the trick.