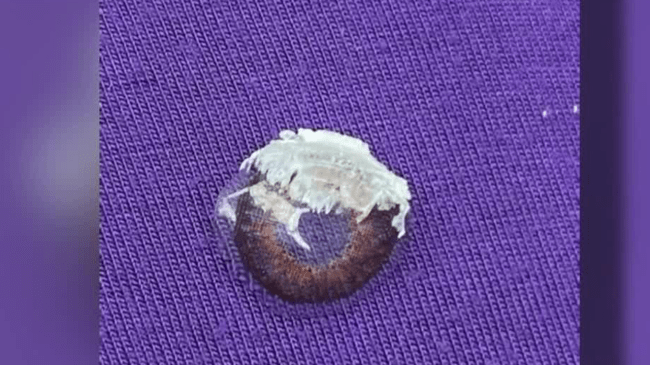 If you thought Gorilla Glue Girl Tessica Brown had it bad when she mistakenly put the extra strength bonding agent in her hair thinking it was hair spray, that was nothing compared to this story about a woman who mistook a bottle of nail glue for her eye drops. We can’t make this stuff up, folks.

According to a report by Michigan’s WXYZ News, this is a real thing that happened.

The woman named Yacedrah Williams says she fell asleep with her contact lenses still in, so when she woke up around 1 a.m. she began to take them out.

Unfortunaetly, she was still a little groggy when she reached into her purse to fish out a small bottle of eye drops, tipped her head back, and proceeded to put a drop into her eye.

It was at that point, as the drop formed on the bottle and began to fall, that she realized that the bottle in her hand was not the right color. It was a bottle of nail glue used to repair broken fingernails that was about the same size as her eye drops.

“I tried to wipe it away and it sealed my eye shut,” said Williams.

After screaming for her husband Derrick to wake up and call 911, “She went into a panic. I tried to keep her from panicking but then I said, ‘Derrick, this is in her eye not yours,'” he recalled.

Luckily for Yacedrah, while she waited for medics to arrive she splashed some water on her eye, trying to remove the glue. This was a smart move on her part.

Opthamologist Dr. George Williams told WXYZ News, “If you ever get anything in your eye, the immediate thing to do is try and flush your eye out. Just either hold your head under a faucet, get a bottle of water, hold your eye open and just flood your eye. You’ll make a mess but you may save your vision.”

Yacedrah eventually made it to the hospital where doctors were able to pry her eye open and remove the contact lens that was still in her eye.

It turns out that the fact that she still had the lens in her eye saved her from a much, much worse fate.

“They said that contact saved my vision,” Yacedrah recalled. “They kept saying you’ll probably lose your lashes, which I did, because they had to pull on it and flip the top of my lid.”

As for what she plans to do in the future with regard to keeping both nail glue and eye drops in her purse, Yacedrah said, “Never. Never. I don’t even think I’ll have nail glue anymore.”