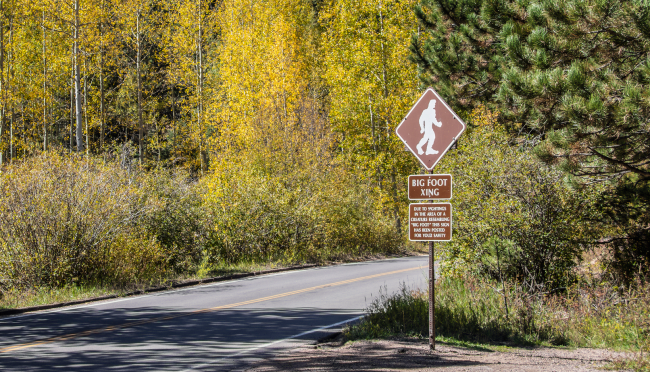 A 20-year-old woman was leaving the Warehouse 24-Hour Gym around midnight in Ashland, Ohio when she says she had a startling encounter with an 8-foot-tall Bigfoot.

Ashland is located around 80 miles from Salt Fork State Park, the home of an annual Bigfoot conference and another recent Bigfoot sighting.

According to the woman’s stepfather, who filed a report with the Bigfoot Research Organization (BFRO), “My 20 year old step daughter had a visual sighting last night in Ashland, Ohio. The date was 4/24/2021. It was about midnight and she had left a 24 hour gym that has woods behind it. She saw a gray over 7 foot creature after hearing a twig snap. She stated it was way too large to be human and it moved way too fast to be human.

“She called us from the local Bob Evans parking lot in tears asking for us to come drive her home because she was so shook up. It was a terrifying experience for her. I went and inspected the area briefly the next day. I found many old deer tracks but no imprints of the creature she saw. I am not a hunter or a tracker and only spent about 10 minutes in the area.

“She is one person I would consider an extremely reliable witness. She is a very responsible college student that is very moral and truthful. She does not drink or take drugs.”

Bigfoot investigator Matthew Moneymaker spoke to the woman and her stepfather and found them to be credible.

“This is not a hoax report,” he wrote in his report.

I spoke with the father first. He is a pastor and high school teacher in Mansfield. He mentioned that there were lots of deer tracks in exposed patches of ground around that parcel of woods when he went to investigate the site the day after his daughter’s sighting. Deer tracks are likely still visible around there.

I spoke with the daughter later in the day today. She is very credible. She’s a nursing student at the nearby University and works as a waitress in town. Nothing about her story seemed unusual except for the location. She was certain the gray furred sasquatch stood at least seven feet tall, possibly eight feet tall. Based on its height she was certain that it was not some other type of animal nor a person in a costume. They way it bolted off when it fled is what frightenned her most. It was very fast.

As she walked out of the gym around midnight and turned to her right in the direction of her vehicle she was walking in the direction of the treeline. She heard the crack of a twig breaking and looked up in time to see the creature turning to run back into the woods about 30 yards away from her, illuminated by the lighting for the brand new parking lot. It ran back into the woods at an angle to the right and was quickly obscured from her view by the corner of the gym building. She only saw a side view of it as it ran off with large arms swinging. She said she most likely would not have noticed it at all but for the noise of the twig snapping, which she assumed was caused by the creature standing on wood debris.

There were no other vehicles parked on that side of the buliding and no vehicles driving on the roads within view.

Whichever way that deer would use to access that island of woods behind the Warehouse Gym is likely the same pathway the sasquatch would have used. If deer or a sasquatch came to those woods from the north then there is only 100 yards or so of exposed field to cross (in the dark) before reaching a large swampy area connected to the Jerome Fork of the Mohican River. So the location is more plausible for a sasquatch than it appears at first in aerial photos. The key element is the presence of deer. That shows that there is both a pathway and a reason for a sasquatch to approach the edge of development late at night.

Local media outlet The Richland Source spoke with Moneymaker about the incident.

“In Ashland, there are only three possibilities,” he said. “Either the witness is lying, which I am sure she is not. Or she saw someone in a Bigfoot costume, which makes no sense. Ordinarily in a hoax, the person reporting the sighting or taking the photos is in on the scam.”

This is the 309th reported Bigfoot sighting in Ohio where the geography and topography is well-suited for Bigfoot habitats.

“I know it’s hard to accept they are real until you have your own face-to-face encounter,” Moneymaker said. “People keep trying to fit them into the mold of another species.

“We are thinking of them as humans, like they would have a home address. They continue to move around, often at night, when deer are more likely to be active. They are not often going to be walking around in daytime in full view.