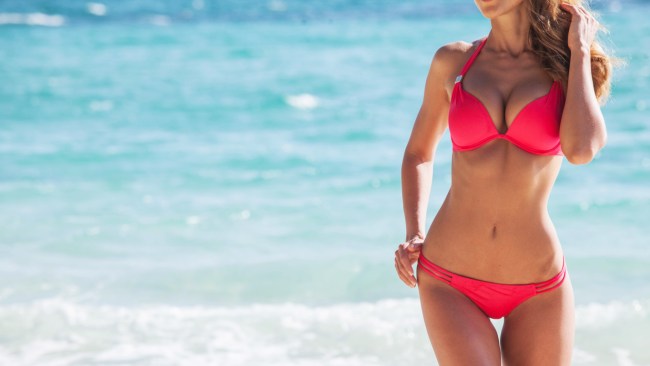 A young woman applied for a job and not only was she rejected, but she was shamed online by her potential employer for the abhorrent crime of… posting a bikini pic on Instagram. Oh, the humanity!

Emily Clow claims that a potential employer shamed her after she applied for a marketing coordinator position. The 24-year-old woman from Austin, Texas, wanted to work at Kickass Masterminds, which is a business startup.

Instead of simply not hiring Clow and moving on, Kickass Masterminds thought it was a brilliant idea to shame Emily online. The company scrolled through Clow’s Instagram and discovered bikini photos. Gee whillikers! Heavens to Betsy! Jumpin’ Jehoshaphat! Bikini pics on Instagram? Why I never! The nerve of this young lady!

Kickass Masterminds screencapped a photo of Clow’s bikini photo and shared the pic on their company Instagram page. Clow was on the company’s Instagram, clicked on their story, and saw a picture of herself.

The post was not congratulating her on getting hired, but instead was shaming Clow for wearing a red two-piece bathing suit. This is 2019, not 1889, when women wore old-timey ankle-length gowns made of flannel as swimsuits onto Coney Island Beach.

Her photo was used by the company to warn other potential job applicants to not wear bikinis and post them to their personal Instagram accounts. Weird flex, but okay.

“PSA (because I know some of you applicants are looking at this) do not share your social media with a potential employer if this is the kind of content on it. I am looking for a professional marketer – not a bikini model,” the company’s Instagram post said with Clow’s photo.

You just know a jealous female in H.R. who is probably named “Claire” is envious of Emily’s bikini body posted this complaint.

Clow’s bikini photo was at a pool and posted all the way back on June 18th with the caption: “gotta cool off somehow.”

Clow told NBC News that after she applied, someone from Kickass Masterminds reached out to her and advised her to follow the company’s Instagram account to increase her chances of securing the job. Narrator: It did not.

“I was objectified earlier today by a company because of a picture of me in a bikini,” Clow wrote on Twitter. “They claimed it made me an ‘unprofessional.’ They screenshot the photo, posted it on their insta story and called me out. I am still baffled that the company handled it in such a manner.”

i was objectified earlier today by a company because of a picture of me in a bikini. they claimed it made me an “unprofessional.” they screenshot the photo, posted it on their insta story and called me out.

i am still baffled that the company handled it in such a manner.

Ironically, the consulting firm was in search of potential employees who “yearn for freedom and are ballsy enough to chase after it.”

this is fucking hilarious, considering pic.twitter.com/dmjABdm4s3

“Go on with your bad self and do whatever in private,” Clow wrote. “But this is not doing you any favors in finding a professional job.”

Clow said she asked Kickass Masterminds multiple times to remove her photo. After the third request, she was blocked by the company on social media.

“You don’t expect a potential employer to do something like this,” she told NBC News. “To have someone that seems really intrigued and wants to meet with you, only to see this is shocking.”

Clow has not taken down any of her many bikini photos from her personal Instagram account. If any marketing companies are hiring and understand the concept that people wear swimsuits in the summer and post photos on their Instagram, Emily Clow might be your new employee.

RELATED: ‘Outraged’ Viewers Force This Weatherwoman To Cover Up Her ‘Risque’ Outfit