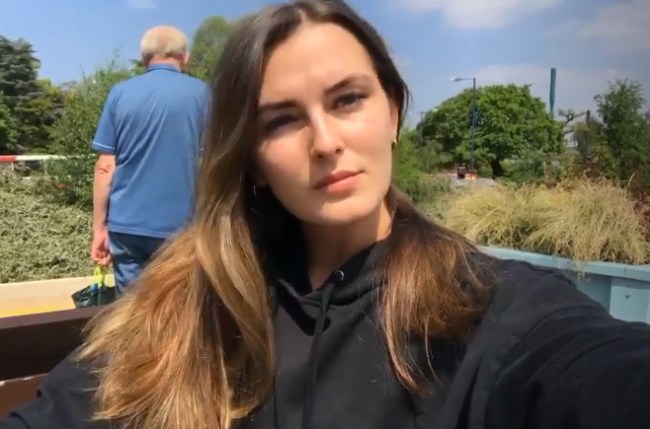 Sometimes, commercial airliner staff get full of themselves. Sometimes, they overstep the boundaries and impose their will over helpless passengers and will coerce passengers to do what they want by threatening to kick them off a flight. That seems to be the case when a 21-year-old woman alleged that airliner staff threatened to boot her off a flight because of her “inappropriate” outfit.

Emily O’Connor was taking a Thomas Cook Airlines flight from Birmingham, England, to Tenerife, Spain. Before the airplane took off, the airline staff informed Emily that she would need to “cover up” with more clothing because she was “causing offense” with her “inappropriate” outfit. The outfit causing all of the ruckus was a harmless crop top. Narrator: It wasn’t offensive.

Emily posted her story on Twitter along with a photo from the airport with the innocuous outfit. O’Connor said the incident left her feeling “sexualized” and “ridiculed.” Emily went so far as to say that it was “the worst experience of my life.”

Flying from Bham to Tenerife, Thomas Cook told me that they were going to remove me from the flight if I didn’t “cover up” as I was “causing offence” and was “inappropriate”. They had 4 flight staff around me to get my luggage to take me off the plane. pic.twitter.com/r28nvSYaoY

O’Connor made it through airport security and through the gate with the same clothes on without a problem. Emily “informed the staff that there is no ‘appropriate wear’ policy stipulated online.”

Emily claims that one passenger cursed at her. “Shut up you pathetic woman,” a male passenger allegedly said. “Put a f*cking jacket on.” O’Connor said that the flight attendants did nothing and said nothing the unruly passenger.

To top it off they allowed a man hurl abuse at me whilst the Flight manager and 4 air staff stood and said nothing.

“They made comments over the speaker about the situation and left me shaking and upset on my own,” Emily wrote on Twitter. There were four members of the flight staff prepared to remove Emily and her luggage from the plane if she didn’t cover up.

asked the plane (as they were all listening now anyway) if I was offending anyone, no-one said a word. The manager then went to get my bag to remove me from the flight. A man then shouted “Shut up you pathetic woman. Put a f*cking jacket on”- the staff said nothing to him

RELATED: If You’re Thinking About Going To The Bahamas For Spring Break, The U.S. Government Has A Serious Warning For You

In the end, O’Connor’s cousin who was also on the flight, gave Emily her jacket so she didn’t get kicked off the plane. The airline staff stood there to make sure that she put the jacket on before they cleared the airplane for takeoff.

I was given a jacket by my cousin sitting at the front of the plane and they did not leave until I physically put it on. They made comments over the speaker about the situation and left me shaking and upset on my own.

Emily’s Twitter story went viral. Thomas Cook Airlines has since apologized for how their staff handled the incident. “We are sorry that we upset Ms. O’Connor,” a Thomas Cook spokesperson said. “It’s clear we could have handled the situation better.”

Thomas Cook said their “appropriate attire” policy is stated in the in-flight magazine. “In common with most airlines, we have an appropriate-attire policy. This applies equally to men and women of all ages without discrimination,” the airline said. “Our crews have the difficult task of implementing that policy and don’t always get it right.”

“Customers wearing inappropriate attire (including items with offensive slogans or images) will not be permitted to travel unless a change of clothes is possible,” the airline’s attire policy states. “Footwear must be worn on the aircraft.”

That’s extremely vague as to what is and isn’t “inappropriate,” and should it really apply to a crop top?