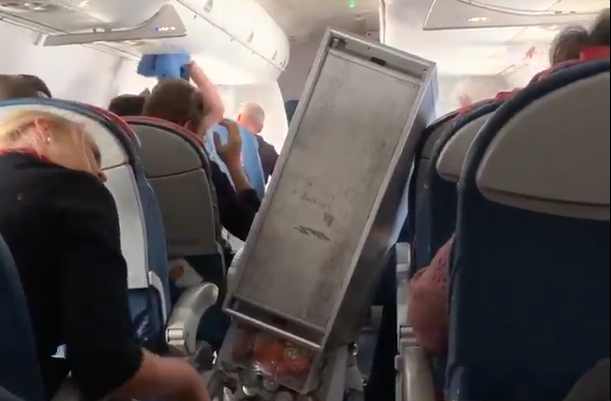 A Delta flight was forced to make an emergency landing after being hit with severe turbulence that was so strong that it caused the airplane to nosedive twice, which flipped the drink cart and injured five passengers.

Delta flight number 5763 was en route from Santa Ana, California, to Seattle, Washington, when it was forced to divert to Reno, Nevada, after a majorly rough patch of turbulence. While it was flying at the altitude of 34,000-feet, the plane was bombarded with serious turbulence that caused it to nosedive twice. The plane’s abrupt descent was so extreme that the drink cart was easily flipped on its side. Beverages spilled everywhere and passengers were wiping down the ceiling.

The regional flight, which is operated by Compass Airlines, had 59 passengers and four crew members on board the terrifying flight. Five passengers were injured and three were taken to the local hospital after the plane landed at Reno-Tahoe International Airport at around 1:30 PST. A Twitter user by the name of Joe Justice posted several photos and a video of the chaotic flight.

Crazy turbulence and injuries, but the @delta crew handled it perfectly, even the emergency landing. pic.twitter.com/NoJWLp5GUv

At the time, the National Weather Service in Reno issued a warning about a strong winter storm impacting the region and advised aviators that periods of “downright dangerous flying conditions with extreme turbulence” could exist in the Sierra Nevada. “This is a particularly dangerous situation for aviation in the lee of the Sierra over the next few days,” the weather service’s warning said.

“Again, @delta crew was amazing in this rough situation,” Justice wrote on Twitter. “My deep gratitude and professional respect for the flight crew. I mis-attributed my congratulations to @Delta, who very well may also be awesome, but this heroism was @Compassairlines crew.”

More photos of the insane turbulence on DL5796 today, operates by @Compassairlines . My deep gratitude and professional respect for the flight crew. I mis-attributed my congratulations to @Delta, who very well may also be awesome, but this heroism was @Compassairlines crew. pic.twitter.com/kzXAQvFR3V

“We apologize for this experience as we get customers to Seattle,” Compass Airlines said in a statement.