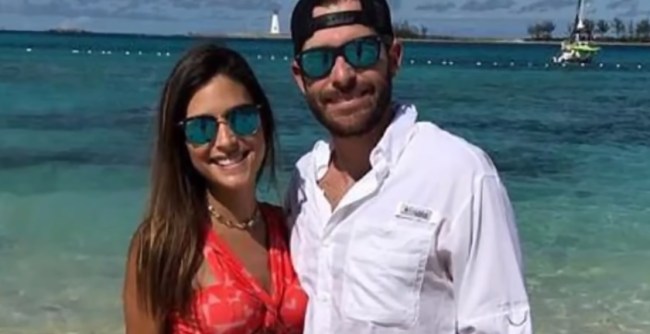 A couple missed their cruise ship and video of them watching the boat sail away went viral, racking up nearly 3 million views on YouTube in a matter of days. The internet has found the couple who helplessly watched their cruise ship strand them on a Caribbean island and the tardy travelers want to tell their side of the story.

The couple who showed up late when their Royal Caribbean cruise ship was departing the Nassau port in the Bahamas are actress and model Maria Gonzalez Roesch and Alessandro Di Palma. They are the ones caught on video frantically attempting to board the huge Symphony of the Seas mega-ship. A passenger on the neighboring Norwegian Cruise Line’s Bliss cruise caught the moment when the couple desperately ran down the pier and tried anything to flag down their boat from stranding them.

Maria revealed that she and Alessandro were on their dream honeymoon when they went viral for all the wrong reasons. Roesch, who is from Costa Rica, was interviewed by The Sun about the “nightmare” of watching their cruise ship desert them in the Bahamas.

“There was a platform with two crew members and they were mad with us,” Maria told the Sun. “We started yelling to them, ‘Please, please let us on, the cruise is still here.’ But the guys said, ‘You are not going to be so lucky and we are closing the doors and leaving.'”

“Alessandro was in shock because it was his nightmare and it actually happened,” Roesch said of her new husband. “He was so frustrated he wanted to jump to the ship. But (the drop) was so big and dangerous.”

“Then we heard the horn. When we arrived to the pier we were in shock,” Maria told the Sun. “I think the worst feeling was to see that the boat was still there and knowing we can go inside and see the boat leave without you. I think I would have preferred to have been at the pier and the boat had already gone.”

Many of the departure times for the previous ports were 5:30 pm, but for Nassau, all passengers had to be back on the ship by 3:30 pm. Alessandro and Maria showed up at 4:15 pm, thinking they were early, when they were in fact 45 minutes late.

“We thought we were on time,” Maria said. “We were there 4:10 pm or 4:15 pm and we heard the call from the ship — but there were so many cruises we thought it was another ship.” By the time they made it to their cruise ship, the gangway had already been removed and the ship was leaving.

She blamed their carelessness on wanting to relax on their honeymoon and they let their guard down. The 26-year-old Maria said she had never missed a train, plane or boat before. You have now and definitely made it count.

The couple lucked out in many ways because things could have been worse, much worse. First off, this was the sixth day of a seven-day cruise and the last stop before the final destination of Miami, Florida. Nassau to Miami is only 186 miles.

Secondly, the couple left their passports, credit cards, and money on the ship. They both thought they would be stranded on the Caribbean island with no identification or money. Fortunately for the newlyweds, the cruise staff retrieved their passports and credit cards from their cabin and gave it to the pilot of the tugboat that was guiding the massive 1,184-foot-long, 18-deck-high, and 228,081-ton Symphony of the Seas ship. The pilot brought the documents back to the Nassau cruise port and eventually got them to the stranded couple.

Maria said that they were not the only ones who were having too much fun in the Bahamas and missed the boat. “There were two other couples. One (couple) were very, very angry so we didn’t keep in touch but the other two were nice,” Maria said. “They were a young couple from California.”

The newlyweds were able to make it back to Miami the following day, but then had to wait for hours until all of the 5,518 passengers disembarked from the Symphony of the Seas before they could board the ship to grab their belongings from their room.

Once they returned home to Costa Rico, they discovered that they were internet sensations. “Of course it would be better if it didn’t happened. But it could have a positive flip-side,” Maria said. “Now I can say it was funny experience and we have a good story to (tell) our kids.” That’s if you don’t forget to bring your kids home from the hospital.