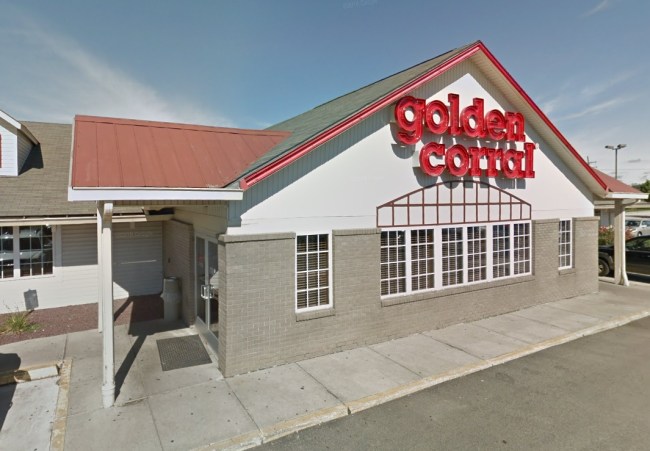 A woman just wanted to celebrate her son’s birthday with friends at a Golden Corral when apparently she was kicked out of the restaurant for “dressing to provocatively.”

During Memorial Day weekend, Sueretta Emke went to celebrate her son’s birthday with her husband, her best friend and her friend’s children at the Golden Corral in Erie, Pennsylvania. The 25-year-old woman from Dunkirk, New York, was about to get some food from the buffet-style restaurant when she was approached by a Golden Corral manager and asked to cover up because she was “dressed too provocatively.”

Emke was wearing a crop top at the time and posted a photo of her outfit on Facebook. The post has since gone viral with over 1,500 Likes and more than 650 Shares. Sueretta said she consulted a lawyer to explore legal options and he advised her to share her experience on social media.

Apparently, it was another customer at the restaurant who complained about the woman’s attire. The mother of one was an hour away from home and didn’t have a change of clothes. “He never would tell me exactly what I was showing too much of,” Sueretta wrote. “When I asked … he would respond that it wasn’t [sic] his place to say.”

Emke alleges that the manager said she needed to change her clothes or leave. Emke along with her group were forced to leave the restaurant. Sueretta received a refund for her meal, but her husband did not.

“I have seen people in there wearing less and nothing is said to them but I really do believe something was said to me because I’m not thin so it’s not considered sexy,” she wrote on Facebook. “They have no dress code and even if they did they just can’t pick n choose who they are going to make up a dress code or enforce in on based on another customer complaint.”

Golden Corral does not have an actual dress code and a spokesperson for the nationwide restaurant chain said, “While we don’t offer a specific guideline on attire, we think the decision made seems out of touch.”

“What really sucks was that was a new shirt,” Emke said. “I’ve never owned a crop top before and I was nervous at first about wearing it but my husband loved the way it looked on me and encouraged me to wear it since I liked it so much. I really felt cute in it and now I never wanna wear that shirt again even though it was the first time I ever wore it and I felt good about myself in it.”

Emke received a letter apologizing for the way she was treated as well as gift cards from a Golden Corral. “Please be assured that the franchise and I are looking into your concerns and taking whatever corrective action is appropriate,” the letter read.

The Golden Corral spokesperson said, “People know and love us for the family dining experience we offer and the way we make guests feel at home, but it appears we didn’t meet the mark in this situation.” The spokesperson said this was a teachable moment and “represents an education opportunity for our restaurants and a chance to make amends with a guest we disappointed.”