CHALLENGE: Find A More Aggravating Scene Than These Women Who Took Over A Subway Car To Throw A Birthday Party 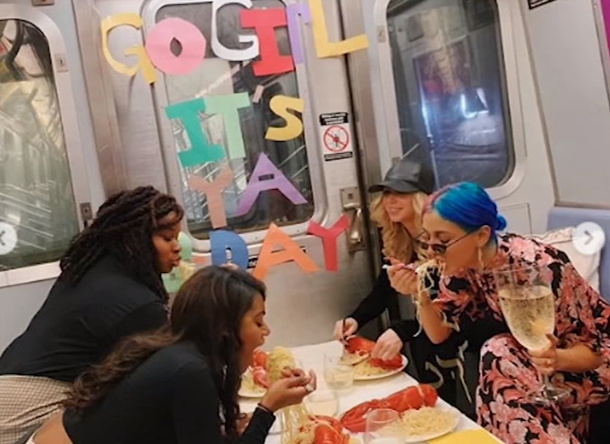 The subway is like a box of chocolates, you never know what you’re gonna get. One day there might be a person wearing a beekeepers getup while playing the accordion. Another day there could be a man coddling his pet Komodo Dragon and singing the theme song from Frozen to keep the beast docile. Another day there could be a person with dookie stains on their JNCO jeans giving a HJ to another person who is eating a grilled cheese sandwich at the same time as being serviced. In this episode of “Totally Fucked Up Shit We Saw On The Subway,” a group of friends threw a birthday party on the New York subway, complete with lobster and pinatas because fuck everyone else, right?

On Wednesday, Amber Asaly and her friends were celebrating her 26th birthday. As the story goes, the group were forced to throw an impromptu party after “reservations at a restaurant fell through.” “Impromptu?” What? Were they riding the subway to their dinner then it got canceled, but thank their lucky stars because they just so happen to carry cooked lobsters and spaghetti with them wherever they go.

They didn’t even do the due diligence to ask the subway workers what their spaghetti policy is.

The friends all purchased all of the accoutrements for a birthday party on the New York Subway — wine, seat cushions, confetti, streamers, a table, and of course construction paper for decorations. The party crew then boarded the J train at the Myrtle-Broadway stop in Brooklyn at about 10:30 p.m. on Wednesday.

“Each friend collectively grabbed a bag,” Asaly told the New York Post. “Then we installed the table on the train.”

Asaly, who a Los Angeles-based photographer, claims an MTA worker saw the party going on and let them be. Horrible job by the MTA worker, this is a subway car, not the local Dave & Busters for your grown-up bday party. Shut this shit down because nobody else wants to deal with this nonsense. I’d so be all Permit Patty on this self-aggrandizing gobbledygook.

“We all dressed up. We made it like a Michelin-starred restaurant. That was kind of the whole point,” Asaly said. Eating on the rat-feces-infested and urine-soaked subway is not like a Michelin-starred restaurant. I’d rather eat a Chipotle burrito on a cruise ship that just had a norovirus outbreak than eat room temperature seafood on a New York City subway with particles of vomit and feces in the air.