Clowns Are Pissed At Stephen King For ‘It’, And They’re Bracing For Serious Backlash From The Film 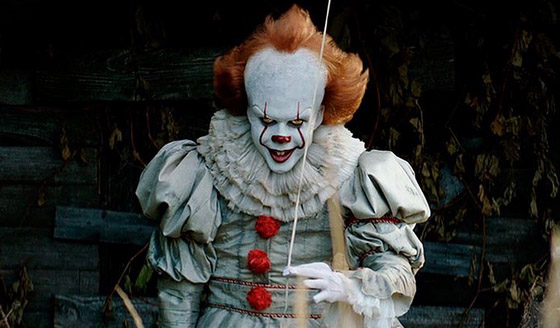 Stephen King’s It will hit theaters next week on Friday, September 8th. The film features a truly horrifying and murderous clown named Pennywise who specializes in murdering neighborhood kids and has been doing so for centuries. The original film came out in 1990, but Stephen King’s rebooted the film and the clown industry is already puckering their butts for blowback from the world.

The professional clown industry mostly blames 1990’s It for the widespread clown phobia, aka coulrophobia, that’s spread throughout the world. An overwhelming number of children are scared shitless of clowns. I was never one of the snowflakes terrified by the sight of clowns but I had friends who were, cousins who were, and I’ve even got a few coworkers here at BroBible who can’t help but make ‘fuck clowns and everything about them’ comments every time clowns come up at work.

The World Clown Association is preparing for a total public war against clowns when It hits theaters next week. Some professional clowns have been harassing Stephen King for months:

The clowns are pissed at me. Sorry, most are great. BUT…kids have always been scared of clowns. Don't kill the messengers for the message.

Clowns are so scared of the impending blowback from this film that the World Clown Association has even released a Guide/Press Kit which details the WCA’s stance on scary clowns: 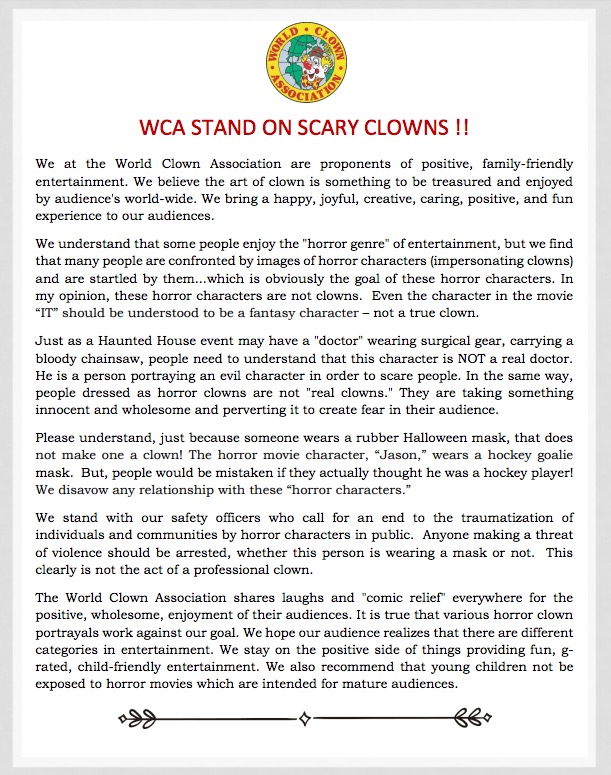 This part is really the only part worth reading:

Just as a Haunted House event may have a “doctor” wearing surgical gear, carrying a
bloody chainsaw, people need to understand that this character is NOT a real doctor.
He is a person portraying an evil character in order to scare people. In the same way,
people dressed as horror clowns are not “real clowns.” They are taking something
innocent and wholesome and perverting it to create fear in their audience.
Please understand, just because someone wears a rubber Halloween mask, that does
not make one a clown! The horror movie character, “Jason,” wears a hockey goalie
mask. But, people would be mistaken if they actually thought he was a hockey player!
We disavow any relationship with these “horror characters.”
We stand with our safety officers who call for an end to the traumatization of
individuals and communities by horror characters in public. Anyone making a threat
of violence should be arrested, whether this person is wearing a mask or not. This
clearly is not the act of a professional clown

The World Clown Association President spoke with The Hollywood Reporter about what they might expect and from the way this interview reads it sounds like clowns are expecting to become the most persecuted people in America. If like me, you find all of this bullshit highly amusing I highly suggest clicking on that link to THR and reading the clown interview.

If you haven’t watched the trailer for Stephen King’s It yet then CLICK HERE, and you should check out this terrifying VR experience after that.