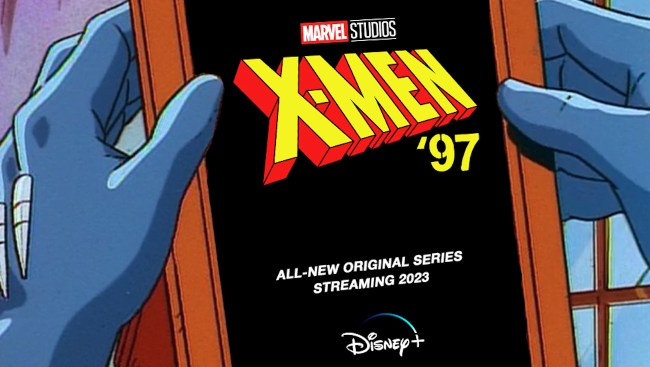 Of the many announcements that were rolled out during Disney Plus Day, one of the most exciting — at least as far as millennials are concerned — was the reveal that the beloved X-Men animated series was being revived. X-Men first premiered on Fox Kids Network on October 31, 1992, and ran for five seasons until 1997. Given the title of the series, it’s possible that X-Men: ’97 will pick up exactly where the original show left off.

Yup, according to Marvel Studios, X-Men: ’97 is in the works and will hit Disney+ in 2023. Not only that but virtually the entire original voice cast — which includes Cal Dodd, Lenore Zann, George Buza, Adrian Hough, Christopher Britton, Catherine Disher, Chris Potter, Alison Sealy-Smith, Alyson Court — will be returning for the series. It’s also worth noting that X-Men ’97 will likely be the first Marvel Cinematic Universe title that the X-Men feature in following Disney’s acquisition of 21st Century Fox (who previously held the rights to the X-Men) a few years ago.

We've missed you, too. See you in 2023 with all-new episodes. 🥲 #XMen97 #DisneyPlusDay pic.twitter.com/uSqJeU5wtc

Well, this is just fantastic news all around. X-Men the animated series was the first piece of content I watched (after The Mandalorian) when I signed up to Disney+.

The world needs a l’il more X-Men in their lives raht ‘bout now. Rogue at your service – ready to suit up and show up! See y’all soon Sugah! #TheRealRogue 💪🏽💋 https://t.co/N3T8Iw2VTV

I expect this show to be nothing but references specific to the year 1997. Cyclops better spend an entire episode ranting about Val Kilmer’s The Saint https://t.co/6rnwQIA6rq

This is a real thing that’s happening I can’t fucking believe it I have a literal recurring dream about there being new or missing episodes I’d never seen and always missing them when they aired 🤣 https://t.co/KneKeKE90K

I swear to God I didn't know this yesterday 😭😭😭 https://t.co/HuwbEttvzg

Whaaaaa. Between the new Predator movie announcement and this, 10-year-old Dylan is squealing. https://t.co/A84MI2m8kG

In addition to the announcement of X-Men ’97, Marvel Studios also unveiled first-looks at Moon Knight, She-Hulk, and Ms. Marvel, and announced a bevy of titles that will hit Disney+ next year, including Echo, Ironheart, I Am Groot, Secret Invasion, Marvel Zombies, Agatha: House of Harkness, Spider-Man: Freshman Year, and The Guardians of the Galaxy Holiday Special. All told, Disney Plus Day was a hell of a day for Marvel Cinematic Universe fans.