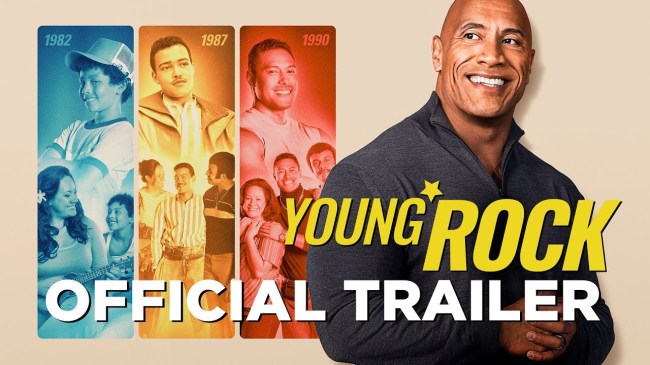 I remember back in, I don’t know, 2016ish, there was a genuinely absurd amount of internet discussion about The Rock running for President of the United States. With The Apprentice host Donald Trump winning the Presidency, I guess everyone just thought, “Well, screw it, if we’re electing orange reality TV stars, might as well vote for bronze movie stars instead?”

In the years since, as we’ve increasingly realized that perhaps hiring entertainment figures to run our government is not the greatest idea, talks of The Rock making a run at the White House have quelled. But with the first trailer for the upcoming (and actually decent looking) NBC sitcom Young Rock, that Presidential chatter is sure to ramp back up again, as the series will feature Mr. Johnson running for office in the 2032 race.

The Rock is currently 48-years-old, which would put him at 60-years-old in 2032, which is pretty much primetime President age: young enough that you’re still clearly quite spry but old enough that you’ve got the benefit of wisdom. The Rock strikes me as someone who would want a little experience under his belt before making the jump to the “main event” (that’s a wrestling reference for ya, where my Attitude Era heads at?), so maybe he follows in the footsteps of Arnold Schwarzenegger and runs for Governor of California. Given his still booming movie career, an appearance in the 2022 California gubernatorial election seems unlikely, but after that, who knows?

Truth be told, Young Rock — which premieres on Tuesday, February 16 — actually looks pretty decent. Can’t tell you the last time I tuned into a sitcom on cable TV (maybe the Parks and Rec finale?), but I’ll give this one a go.