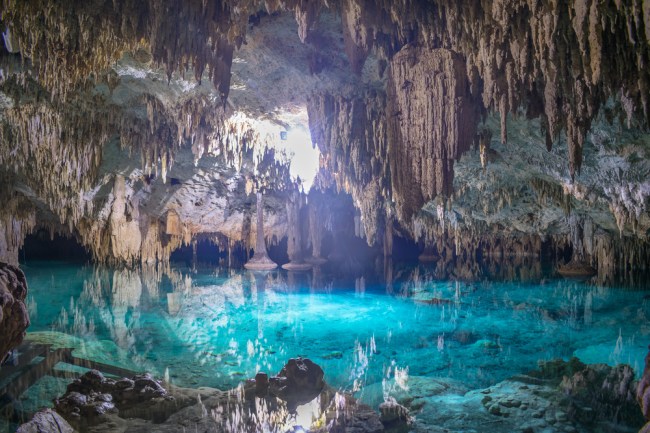 The Yucatan Peninsula of Mexico is home to Tulum, Playa del Carmen, Cancún, some of the most popular tourist destinations in Mexico with gorgeous white sand beaches. But if you venture away from the beach and into the jungle you’ll fine cenotes.

I’ve been to the Yucatan more times than I’d like to admit and I’ll tell you straight up that the cenotes are my favorite part of the region. Each of these freshwater caves/sink holes/swimming holes are part of a massive underwater river system which flows all throughout the area. These are huge travel destinations for cave divers. If you’ve never been to the cenotes you’ve 100% at least seen them on Instagram, even if you didn’t know what you were looking at. Here’s what a typical cenote looks like:

Stepping into the underworld 💦👣 ••• This cenote is so beautiful and only about a 15 minute drive from the town of Tulum. The water really is this gorgeous plus it's warm! This cenote streches for miles underground through a vast cave system that you can scuba dive through. For me, I was more than happy swimming with my head above water with my turtle friends. 🐢💗 • • • #cenote #grancenote #tulum #mexico #cenotes #tulumlife #quintanaroo #beautifuldestinations #nature

Archaeologists and divers in Mexico have just made an incredible discovery related to two of Mexico’s largest underwater caves: they are actually connected and are ONE cave. Combined, the Sac Actun and Dos Ojos caves form the world’s longest continuous flooded cave. This new super cave will be named the Sac Actun system since it was the larger of the two caves.

Many caves in the Yucatan were at one time above sea level and were dry or partly dry. Evidence of early human inhabitants and extinct fauna have been found inside some cave systems. Relics of Mayan culture, whose descendants still populate the peninsula, have also been found in the caves.
“This immense cave represents the most important submerged archaeological site in the world, as it has more than a hundred archaeological contexts,” Guillermo de Anda, a subaquatic archaeologist, said of the find. “Along this system, we had documented evidence of the first settlers of America, as well as extinct fauna and, of course, the Mayan culture.” (via)

On a personal level, is kind of annoying because Dos Ojos has always been my favorite cenote to visit. I hope Dos Ojos at least retains its name for tourism purposes while the formal name is changed. Otherwise, it’s going to be a massive pain in the ass to explain to friends which cenote they should visit and how to get there. Cenote Azul is probably also up there and tied as my favorite if you’re looking for another good ‘off the beaten path’ cenote to visit and spend the day.

For more information on the world’s longest continuous flooded cave you can CLICK HERE to visit ABC News‘ website.