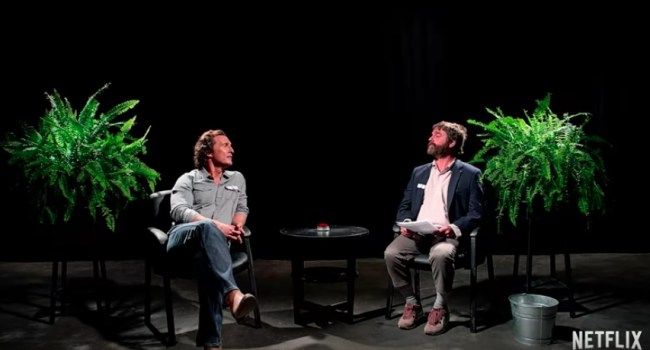 Yes there will be people asking why we need a movie rollout of the Behind Two Ferns concept, and to those people, I saw go sniff poop ya poor sniffers!

If you enjoy BTF (what real fans call it) as much as I do, you owe it to yourself to sit through this entire movie with a smile on your face, even if everything outside the interviews sniffs poop like those aforementioned poop sniffers.

The movie was co-written and directed by Scott Aukerman, whose last big project for Netflix was the funny Michael Bolton’s Big Sexy Valentine’s Day Special  in 2017.

It will be released worldwide on September 20th on Netflix, so you don’t even have to wear pants to see it.

I'm trying to understand the internal logic behind a movie version of 'Between Two Ferns'.

The BETWEEN TWO FERNS movie is my AVENGERS: ENDGAME. https://t.co/avid16dmjX