It’s Official: ‘Zombieland 2’ Is Definitely Happening And Set For A 2019 Release 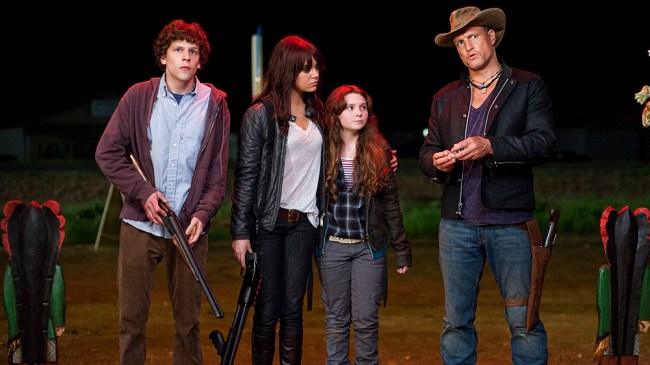 Zombieland 2 is really, really happening! Sony Pictures announced that the Zombieland sequel is officially happening. The beloved zombie flick from 2009 that had unexpected and remarkable success will have a second film and just in time for the original movie’s 10th anniversary.

The cult classic horror made $102.3 million at the worldwide box office, not too shabby for a movie that was made for less than $24 million. The screenplay has already been written by Paul Wernick and Rhett Reese, who wrote the original and penned the Deadpool films. Fresh off of wrapping up Venom, Ruben Fleischer returns to direct the Zombieland sequel. Production is expected to start in January 2019 and the sequel will hit theaters in October 2019, a decade since the original movie’s release.

Zombieland 2 will still focus on everybody’s favorite zombie-bashing group and the new movie is “taking the quartet from the White House to the American heartland as they face off against new kinds of zombies that have evolved since the first movie, as well as some new human survivors.” The studio says their most difficult challenge is that “they have to face the growing pains of their snarky, makeshift family.”

The whole crew including Woody Harrelson, Emma Stone, Jesse Eisenberg, and Abigail Breslin will reprise their roles and be back for the Zombieland sequel. “You see, He was in the ass-kicking business and… business is good.” Well, maybe Bill Murray won’t be back, but he has his own zombie movie coming out in 2019. The movie is called The Dead Don’t Die and it will star Adam Driver, Daniel Craig, Rosie Perez, Steve Buscemi, Tilda Swinton, and Selena Gomez. But we’re still crossing our fingers for a quick cameo by Billy Murray.