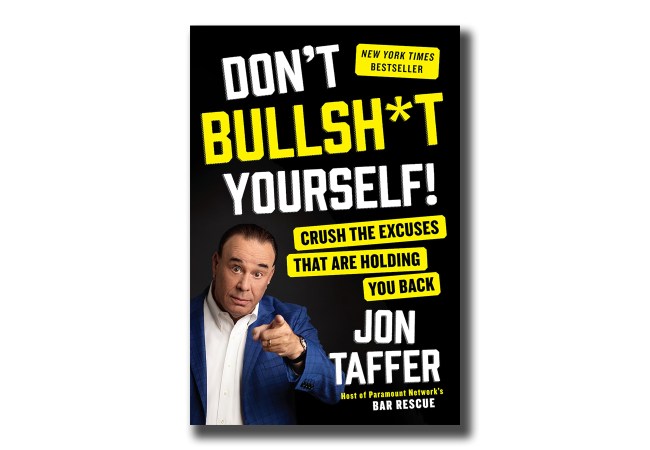 It’s no secret: We think Bar Rescue is the perfect reality show. It’s funny, it’s entertaining, and you learn something nearly every episode.

The main reason for the show’s success lies in host Jon Taffer—a nightlife consultant who brings a fiery intensity to every episode. Once you watch him once, you’re hooked. It’s kind of extraordinary that this is show represents the first time he’s helmed a series.

I got a chance to briefly chat over the phone with Taffer last week. Our talk came after what is always an important moment in the show: Taffer had just finished training the staff, and he was about to bring in a construction crew who would helm a 36-hour remodel of the store. On Sunday, the barkeeps and owner would come back to their newly redesigned bar for a big reveal.

In the meantime, here are 10 things Taffer revealed to me about his life and Bar Rescue:

We shoot for five days. I’ll get there on the first day and do the recon. I’ll stick my nose in the competition, and I’ll get to the bar that night. When I leave the bar that night, that’s normally at around 2 in the morning or so. The comes Day Two. Day Two is the most brutal day for us on Bar Rescue, because that’s stress test day. We start early in the day and we train all day long, then we do the stress test and that goes until about 3 or 4 in the morning. When you see me talk to the staff after the stress test, that’s really late at night.

The third day is a little easier for me, but harder on my experts. The third day is all about training. So we’re teaching them to bartend, cook the food all that…. Then Day 4 is transformation day. And the last day is reveal day. I come in at 3 in the afternoon because my designers were building all day, and then we typically show it to the staff around sundown, 7 p.m. And then we open our big launch reveal and then I’ll stay the night till around midnight or 1 in the morning.

2. The bars are normally in worse shape than you think.

When I started Bar Rescue, I said to the network, “Listen guys. I don’t want to be set up with bars that are easy. If I’m going to do this, I want to get the worst disasters in America. Find me stuff that I can’t do easily, give me challenges.”

And son of a gun, that’s what they’re doing. I NEVER realized they could be this bad, to be honest with you. You typically don’t see depths of failure that bad in normal life. These people are disasters.

3. The bar owners kind of know when Taffer is coming.

This really gets me. I’ve done 37 episodes now of Bar Rescue. This will be our 30th episode that aired [on Sunday night]. In almost all the rescues I’ve done… they think I’m going to come to one of three bars in the neighborhood. So they’re not sure I’m walking through the door, but they’re pretty certain I will. You’d think after watching 20 or so episodes of Bar Rescue, they’d CLEAN UP before I come because they know I’m going to go ballistic! And they STILL don’t clean up. I’ve found that it speaks to why you’re failing. Even when you know I’m coming, you still can’t get it together!

Sometimes it’s laziness. Sometimes it’s ego. A lot of the guys think, “I’m the guy Taffer’s going to love. He’s not going to scream at me. He’s going to love everything I do.” A lot of them are surprised to find the opposite. You’d be stunned to find how many people say to my producers and such, “Oh, he’s not going to scream at me. Everything is going to be perfect.” And then I walk into an incredible– excuse my language–shithole. It’s just remarkable. And it happens all the time.

4. And it still surprises Taffer when owners fight back. (They fight back a lot.)

It astonishes me to tell you the truth. Think about it: For some of these people, they’re $900,000 in debt. They’ve lost their homes, their lives are on the line. They can’t afford to buy me lunch, much less pay me a fee for being there! So I show up with a checkbook and 30 years of experience. You think they’d be thanking the heavens. It doesn’t happen that way.

5. One of the most ridiculous episodes came two weeks ago. It involved a horse in a bar, blacked-out drunk co-owners, and an incredulous Taffer.

One of the most remarkable moments [involving bad owners] came during last Sunday’s episode. Think about this: Married couple. The bank is about to foreclose. They’re in debt, they’ve had to move out of their home. So this is over for them, they’re done. So I show up, and they’re UNBELIEVABLY drunk. And in the morning, they don’t even remember meeting me! And their lives are on the line!

6. And the angriest he ever got was to the owner of the failing Denver bar, Zanzibar.

[Expert and executive chef] Duffy is a dear, dear friend of mine. He’s also one of the greatest guys I know. Just a great father and sweet guy. And [Zanzibar owner] Ami looked at him and said “Fat boy!” to him three times. I couldn’t believe it. What you didn’t see is that before he called Chef Duffy “fat boy,” he called his employees “jerks.” “They’re jerks,” he said. “And fat boy, hey, fat boy!” And honestly, if he had insulted me that way, I probably wouldn’t have reacted like that, but he insulted one of my experts. And that [fight] was real, and that was intense.

But I’ve got to tell you, I watch Bar Rescue on a computer as we’re going through the editing process and such. And I have never cried like a baby at the end of an episode like I did with that one. The first time I saw the cut on my computer, I watched Ami say [at the episode’s end,] “I prayed to God and he sent me an angel, Jon Taffer.” I teared up. To think that we went from a physical altercation to THAT in four days was remarkable to me. And that was true.

The amazing part of Bar Rescue is the emotions and personalities. It almost could be called People Rescue, you know?

7. The reveals are the best part.

I’ve got to tell you: It’s fun for you to see the bar on Bar Rescue. But watching the faces of the employees when I reveal it is a very unique experience. That’s not something you get a lot as a consultant. To blindfold them and reveal their own businesses to them is unbelievably exciting and rewarding. It’s a unique phenomenon.

8. After the disasters that Taffer walked into at New Orleans’ T.J. Quills and Fells Point’s J.A. Murphy’s, it might not be the best idea to open a bar with your fraternity buds.

But you know, [owner of the former T.J. Quills] Darren is a really good guy. And they’re doing incredibly well. Annex is up about $40-50,000 a month. I understand the line goes around the building. They never took their shirts off again. They’re mature… I’m incredibly proud of those guys. They just needed a little kick in the ass, and they needed their eyes opened.

And you know, after Zanzibar, Murphy’s is probably the angriest I’ve gotten. They served that tainted food to my daughter. My friends affectionately call it the “Chicken Meltdown.”

Raw chicken can kill you…. I was furious man, that was my little girl in there.

When I’m out, if [the service staff] really screws up, then I get angry, but normally… I tend to deal with it, I’m out to have a good time. I can separate the two [lives]. Now if the food sucks, that’s different, I’ll have them take it back.

But you know it’s funny. Now, because of Bar Rescue, people sometimes know who I am, so I tend to get pretty good service. [laughs] I think they don’t want to know what will happen if I don’t.

10. Finally, I passed along a joke TV pitch, thought up by CollegeHumor writer Alex Watt, for a show called Life Rescue. The premise: Taffer goes around and teaches people to be more like him.

Unbelievably, this is actually kind of happening.

Bar Rescue is currently on hiatus, but you can watch it on Spike TV.